Showing posts from April, 2010
Show all

April 30, 2010
Just got back from the Intelligraphics / ASI office closing party. It was a great event, albeit low on attendance. Saw some great old faces from my days of digitizing on a 6' digitizing board with dual black and white screens using a VAX 11/780 mainframe and an Intergraph IGDS database management system. Why I know these things I do not know. It's important though to remember your roots and from whence you came so you can keep it all in perspective. It allows you to know not only where you came from, but where you're going to, perhaps. Spent the majority of the night with my good friends Bill and Patty. Talked a lot about the old times and the crazy stuff we did, but a fair amount about what's transpired since then. People lead such diverse lives; divorces, place changes, job changes, kids come and gone and come back again, etc. It is so weird to think that something that feels like it was just last year, was actually 18 years ago now. The people are still the same
Post a Comment
Read more

Welcome to the Random Thought Table

April 29, 2010
Just got back from a walk with the dog on a gorgeous April evening. Probably still 72 degrees with a light wind. I'm wearing a pair of shorts and a shirt, both stained with the grease from the Beef Brisket Donna made for dinner. I probably shouldn't have left the house in them. I always worry about running into someone I know and looking like I've got some eating disorder or something. I do that a lot . I won't go out in public with just sweats on. I think it's sloth looking and I don't want to be that guy. It's like Jerry Seinfeld said when he saw George in sweats. "You know what that says to people? I give up." So true, that statement. People have become so lazy they can't even get changed to go out. C'mon , how old are we? PJ bottoms and flip-flops in the grocery store? Really? C'mon . Spare me the visual, guy. Yesterday was writing class. Only five people showed, and most of those were poems. It was a nice change and I got
Post a Comment
Read more 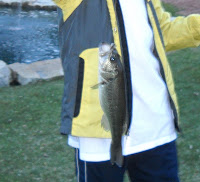 Last night was the boys club lock-in at church. It is a crazy affair, kind of a disney-world end of year event for the clubbers. It used to be held at the YMCA in Greenfield, but it got to be that the numbers dwindled so much that they had to scale back. There were probably 55-60 boys in attendance, a dozen rangers, and a dozen dads. It was an absolute blast, even as a full grown adult. (The boys liked it too). The night started with a prayer and some ground rules. From there, I was dismissed to get ready to oversee the fishing event down in the baptismal pond. It was nice that way because in years past I was released at the same time as the kids, so had to frantically bait 8-10 hooks while kids waited. This time I was able to get a jump and have all the lines set up and baited by the time they got down to the pond. I even got to cast a line out for 10 minutes alone. I Didn't GET anything, but hey, I wet a line. It was as crazy as in years past, but at least this time the bo
Post a Comment
Read more 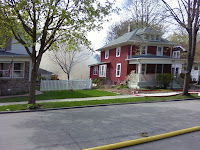 The wind died down today and made it a fine day for living. Started like every Sunday with a great message at church. Stuart Briscoe is working on a 6 week study in Matthew that is convicting and poignant. Cut the lawn, raked a little and tried to make it look like we're not hoarders. Then I took Toby to the dog park with Sarah. It was as good as always. Such a little piece of heaven in the city. I am such a dog and animal lover. Today's showman was the French Bulldog that looked like a small pig. When we were on our way home, we saw smoke billowing from an area right near Ben's school. It was frightening and we were curious, so we stopped and pulled onto a nearby street. As it turns out, it was only a garage, which was a great relief to both Sarah and I. No one should have to lose a house to a fire, especially on a Sunday. I think it was especially shocking to Sarah who claimed that she'd never seen a fire before. All fires are spooky to me, especially given my
Post a Comment
Read more

April 17, 2010
Alas the weekend is upon us. Hooray! Had a busy start to the day today. Ben had soccer at 10:15. His team played much better than last week, but still lost 2-0. The goals were both lucky as the goalie got his hands on both, just couldn't seal the deal. Then, after drinking a full strength Starbucks at the game, I went into spin mode where I had so much that I wanted to do, I wasn't sure which thing to do first. I ended up getting most of it done, but not at all in the order I planned, nor to the level of satisfaction that I'd hoped for some of it. Had a decent week last week. Writing class was OK. We had an outstanding poem submitted by Alita on Google. She was looking up how to make a recipe, and ended up turning what the auto-fill came up with into a poem that was hilarious. How to lose weight, for example was right above how to get pregnant. Brilliant it was, funny and poignant. Tomorrow is writing day. I've got to keep moving on the memoir, lest it fester and d
Post a Comment
Read more 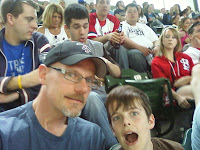 I went to the first baseball game of the year yesterday with Ben. It was just OK. The Brewers managed to lose badly 7-1 to the Cardinals. I'm probably un-American, but it was a bit of a love/hate experience for me. I love watching live baseball. I can never sit through a full 9 inning game on TV, excluding the playoffs when either the Brewers or Twins are in them. The game moves a bit slow for my liking, but I can tolerate it if I'm AT the game. The downside to being at the game however is what it has become. It's the seven dollar beers, the blasting music, (and I mean blasting), the cramped seats, the countless drunks, the food lines, the overpriced parking and food, the traffic, and to top it all of the closed dome on a 70 degree day. See I told you I was un -American. I don't mean to be a stick in the mud, but I guess I could tolerate it more if I liked it as much as say, professional football. I think back to the days of County Stadium, when things were still
Post a Comment
Read more

April 08, 2010
I got tired of the look of my blog, so changed the template. I like this new look much better. Let me know if you do too...whoever you are. It's been a brutally long week, this being the third Thursday of it so far, it seems. I think when you get 80+ degrees on Monday and it's snowing on Thursday morning, that kind of drags the week to a halt. I hope someone kicks it in the butt, because I'm getting tired of going to work. Writing class was a drag last night too. Only 3 of us showed up, so it was a quiet session. I've grown to like the big groups where we cover everything from wild, whacked poetry to far fetched fiction, to thought provoking memoir and all points in between. The group gets kind of rambunctious and I'd almost say punchy after the first hour of bad coffee and sugar sweets. This group has really grown on me. I feel I'm with equals again, even though most of them are more accomplished writers than me. There is no putting down of anyone, it's
Post a Comment
Read more

April 06, 2010
Had a great Easter celebration with friends this year. We did a progressive dinner thing with two other families. It started at our place at about 2:30 with drinks and appetizers. It moved to the Barretts at about 4:15 and finished up there with dinner and desserts. It was a ton of laughs with them and the Merschdorf's , as it always is. Such good friends they are, both of those families. It wasn't without bloodshed, as both Lauryn and Tom got hit with the basketball during a game of elimination. No one needed professional medical attention, though Tom did have an ice pack on his schnozz for a bit. The pickup basketball game was actually kinda fun and a nice outside diversion on a very pleasant spring day. Opening day for baseball was yesterday and was a non-event for me. It was a beautiful day, which is a rarity for the opener, but didn't mean much to me, as I was at work and really didn't even get to check the score until they were down 5-1. They eventually lost 5
Post a Comment
Read more
More posts