Showing posts from February, 2019
Show all

So, I've been fairly quietly shopping around my latest poetry collection, Thoughts From A Line At The DMV , to various publishers. I had it out to 14 different small presses in two different forms, a full collection and a pared-down chapbook. A few of the submissions required a "reading fee" and a couple were contests. These are always exciting times once a submission  has been sent, a time of waiting and expectancy. On Tuesday, I got an email with the subject "Kelsay Books acceptance." Now, it's hard to describe the excitement at seeing an email like that in my inbox. I opened it to opening lines which read: "Thank you for your excellent poetry submission, Thoughts From A Line At The DMV. We would love to publish your book!" Well, someone pinch me. The details are very sketchy at this early stage, but I do know that it should be published sometime in 2019. I also know that Kelsay Books is a highly respected publisher of quality, beautif
1 comment
Read more 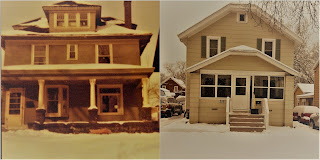 This past week I received an email from an old neighbor that lived with us on Portland Avenue. He'd somehow come across my book, The Portland House. His letter was complimentary in nature. One of his quotes read, "We laughed, we teared up, we learned a great deal about your family and our neighborhood." "Home," then and now. Portland on left, College on right Additionally it was filled with his own memories of the neighbors we had as well as some of his experience. I remembered most of the neighbors, but his experiences were his own. He went on to say he still lives in the area and thanked me for the look-back. Then, I was asked to review a forthcoming book of poetry by, Vegetarian Alcoholic Press . The collection was about life in Appalachia. While the collection is well written, the thing that impressed me the most was a line about how the author had started a new life yet kept thinking about "home." One of the stanzas that caught my eye, r
1 comment
Read more

Things have been active and changing on the writing front these past few months. Winter seems to give me more time to write, submit, edit and stare off into space waiting for the next line. That last part is where I probably spend 50% of my "productive time." Sometimes it only becomes apparent how many plates I have spinning when I step back and take a look at all that I'm doing. I tend to add things one at a time and before long they add up. Here's a rundown of all things written. I was recently asked to be part of the Program Committee for the Southeast Wisconsin Festival of Books . This committee organizes one of the bigger book conferences in the state. It looks like I'll be part of the Authors in the Schools portion of the committee, but it is also nice to be behind the scenes and have input on how the conference is constructed. I was also asked to be the nonfiction judge for the Wisconsin Writers Association Jade Ring Contest . This will entail r
Post a Comment
Read more

Happy To Be Here 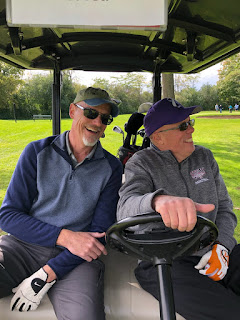 So as a few of my last posts allude to, I am powering through this winter trying with all my might to make it through to ice-out so I can get my kayak back in the water and find my zen. It is a grueling stretch of winter for me and my better half. We have each other to laugh through the looming "Winter Storm Warning." so that counts for something. On Tuesday we got another 8-10 inches or so. I woke up early as I often do the night after a storm and set to work on the driveway and walk. About 3/4 of the way through the process, I twisted wrong and blew out my oblique muscle. It is right below my rib cage on the back side and I knew it was bad when I did it. I treated it with ice, Naproxen and an Epsom salt bath. It seems slightly better today, but I suspect the healing will take a while. But the untold benefit of it was that even in my pain, I realize how good my life is and how lucky I am. My wife was nice enough to finish up the shoveling and followed up a time or two
Post a Comment
Read more 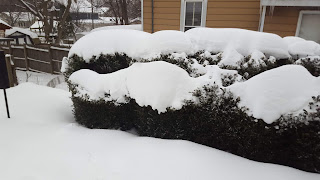 Well, it's finally happened. It's that time of year when I am officially done with winter. DONE. We had the most boring super bowl game ever and now with regards to sports, I have nothing to look forward to until next fall's football season. To add to that, the quirkiness of the weather we've had the past few weeks has pushed me right over the edge. The problem is, we still have 38 days until the official 1st day of spring (March 20th.) This seems entirely too long, but at least we can see the light at the end of the tunnel. When this time of year hits, I fall into my power-through-it mode. Having said that there are some things I pledge to between now and then to get me through it. I HEREBY PLEDGE TO: Continue to drag myself out of bed in relative darkness, do my stretching, and drink my coffee as I plow through my workdays. Work is good. Well, it's warmer than my house, anyway. Keep over dressing to almost clownish proportions at home on the cold
Post a Comment
Read more 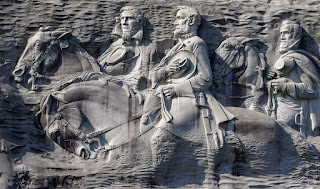 It has been a strange week of weather round these parts. We started with an 8 inch snowfall last Monday, followed by polar vortex 50 below wind chills mid week followed by 40+ temps for a few days, followed by a freezing rain/ice storm. I mention it because it is how our discussion began over coffee this morning with my coffee buddies. As I've mentioned, we meet every Thursday, as an informal book study, one that sometimes doesn't get to the book at all. In fact as a preparatory text last night Claude, the guy who kind of rallies folks every Wednesday evening, said that Thursday's discussion would be Chapter 4 which was mandatorily optional. That's sort of how we roll. For no one reason, I really love this hour of the week. I love the randomness and the deep thinking and the laughter that it brings. It's like scrolling through Twitter for an hour, but way better. Today's discussion took a winding road. We went from the weird weather to: One of the guys&#
Post a Comment
Read more 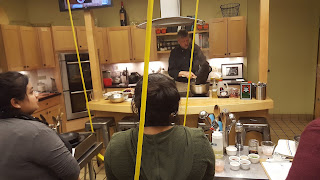 Last night as part of my wife's corporate holiday party, we were treated to a cooking class at Braise restaurant in Milwaukee. For those that don't know, my wife works at Purple Door Ice Cream in Milwaukee. It is owned by two of the coolest people going, Lauren and Steve Schultz. Every year as a recognition to their staff, they have a post-holiday party of sorts to recognize the hard work of their staff. So when it was announced that this year we would be spending the evening in a class where we learned how to cook a couple of appetizers which we would then eat, I was both intrigued and a little mortified. You see, I'm not much of a cook. Oh, I can get by and am capable of the basics, but as a rule, it is really not my thing. I can do it, but to me it is drudgery and work. I know it's weird, but it has never been something that "relaxes me" like it does for my wife. Well, at the class, there were six cooking stations with 3 people to a station and a c
Post a Comment
Read more
More posts