Showing posts from March, 2010
Show all

Now...What Was I Doing Again?

March 29, 2010
Got off work a little early today as "bank hours" from Saturday's upgrade fiasco. It will give me a chance to catch up on some writing, work out and a few other loose ends. I was thinking the other day that if my writing is "good", as many people say it is, what could it be if I had the time to put some real thought into it? I seem to be screaming from one event to the other lately to the point of distraction. The only time I have to do decent writing, I feel so pressured to "hurry up and get it done" that I don't get past the surface level in my description, dialogue and humor. What's up with that? I'm not implying that I want to move to Tibet and don a robe, just that I think to write really well, you need to commit to doing it in a quiet, distraction free environment, if there is such a thing. How does one achieve this? If you find out, let me know. I AM happy with the frequency of my writing, as opposed to a year ago when I was floun
Post a Comment
Read more

March 27, 2010
Spent the better part of my morning, my Saturday morning, installing an upgrade at work today. It was going so smoothly. I went in at 9:00 and it was almost done at 9:45. Then, in epic ESRI ArcIMS fashion, it failed. I guess I can't blame it on ESRI this time as it was really a case of Servlet Exec not talking to the Java Advanced Imaging libraries very nicely. After uninstalling and re-installing Servlet Exec three different times, I finally had to walk away. I went and ran some errands that I had to get to and gave myself time to think. It really is amazing what walking away from a problem can do sometimes. I deduced that if I uninstall the Java SDK and then re-install it and the Java Advanced Imaging, something might click. Well, the fourth time is a charm. This time SE saw the JAI and all was well. Victory! It's funny how every time I run an upgrade of this stuff I get a different outcome. It's because this stupid software is 4 levels deep. You have IIS and
Post a Comment
Read more

March 23, 2010
I got news yesterday that a second poem of mine was accepted for publishing! Whoopee! That's two in less than a month. I'm still not sure what this means. I never intended to go into this writing workshop and learn to write poetry, that's for dang sure. I figure I must be doing something right. Anyhow, the poem is about a meeting between two people (Donna and Me) and it's actually what I feel is one of my best. It's titled "The Start of a Beautiful Friendship" and it's being published in a rather obscure publication called Echoes. I'd point you to a website, but evidently it's still in the planning stages. When the information is available on how to get a copy, I'll be sure and post it here and on Facebook . I'm currently working on a couple of short stories about dead house pets of my past. There's too many to count, but those that were memorable will be in this work. I hope to get it published in some form as one of my first c
Post a Comment
Read more

The Second Day of Spring

March 21, 2010
Today when I woke, the snow from yesterday had all melted, and that is a very good thing. When I woke up yesterday, I just said "Crap!" I and the rest of Wisconsin was spoiled by last week's warm weather. Went over to a friends house today to watch the Badgers mail it in to Cornell. My goodness they got schooled. They looked flat, couldn't rebound, play defense or sink shots. Other than that, they did awesome. Oh well, I'm pulling for Northern Iowa for the rest of the way. Them and the rest of my bracket winners (Duke and Syracuse). It is Sunday night and I'm exhausted so will keep this post short. Hoping you get challenged and stretched this week in whatever you do. Live Life! Blogging off...
Post a Comment
Read more

March 20, 2010
Went to see Norah Jones with Donna last night. It was amazing. She has such a gift in her voice. It had me absolutely swooning. She did most of her new album sprinkled in with a few of her old songs. It would have been disappointing if her new album wasn't so darn good. Her electric guitar handling was not "clumsy looking" as one critic noted in a review about her prior shows. She's a natural with any instrument she's playing, including guitar, piano, organ, harpsichord, or whatever. She's simply phenomenal, and had a backing band that was really something too. (Guitar, Keyboards, Vocals, Bass, and drums) It was a night I'll remember for a long time. It was an interesting study in human behavior and what people do, say and wear. A pretty tame audience with a mix from 20 somethings all the way up to older farts than me. The nice thing I noticed about the concert was it wasn't too loud. The acoustics were spot on and the sound level was perfect. I tol
Post a Comment
Read more

Chairman of the Board

March 13, 2010
Took Ben to the skateboard shop today to get his custom made skateboard. The thing actually cost $130 after all was said and done. It was sticker shock, to be sure, but he saved for it himself, so he was able to get what he wanted. He was SO happy, it was fun to watch. He played it cool when the owner was pointing out the various custom options. It's like build-a-bear, without the corniness, and at a much higher cost. He picked out a board first (He got a Baker model, for what that's worth.), then picked out trucks, bearings, wheels and hardware. The "dude" at the shop then assembles it all while you wait, including the black sandpaper "grip tape" that goes over the top. It was a good male-bonding experience, in an urban, twenty-first century sort of way. Within a couple hours of getting it, he had some nice scratches on the underside, but that's all part of the deal. If you're not grindin ' it, what'd ya buy it for? Before we went to the
Post a Comment
Read more

March 11, 2010
We've been members at the YMCA for about two weeks now. I'm not sure how I feel about it. My wife wants to run in a 5K race. You have to understand she has never been athletically inclined in the least. She always says she hates sweating. I can appreciate that, I guess. So she decided to take charge all of the sudden, and has undertaken the Couch to 5K program. It starts slowly with a mix of walking and jogging. She is in week three and seems to be hanging in there. She had some pain earlier this week that she self diagnosed as Compartmental Syndrome, thanks in part to WebMD . After taking some advice, she did better today and was pain free. I'm just elated that she's taken charge and is seemingly committed to completing the program. My prayer for her is that she begins to experience the joy of a good workout. The endorphins, the renewed energy levels, better sleeping, confidence, and everything else. Me, I'm doing OK too. I typically start with weight training,
Post a Comment
Read more 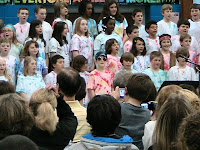 Just got back from my son's last concert as a grade schooler a couple hours ago. It was a fine display of vocality . 100 + kids partook and put on a pretty good show for the parents and grands. Oh sure, there were some clunkers, but hey, the price was right and so I can't complain. They finished with a Beatles Medley (The love medley, they called it). It was one of the better concerts I'd been to over the years, mostly because all of the songs were from the 60's and so I knew them all. (Abraham, John , Martin, Surfin ' USA, Locomotion, etc.) It was a good time in a jam packed, sweaty gym (Yes the same place as the Family Dance a few nights ago). I love those kinds of events, as they pull the community together for a common cause. It was the last concert for Randall Elementary proper. The school is becoming a Stem Academy for K-5 th grades next year, with a change in focus to engineering and math. We'll see how that shakes out. Well, I wanted to get a po
Post a Comment
Read more

March 05, 2010
I just got back from my eleven year old sons' school "family dance". This soiree' is an exhibition in noise, sensory overload, kid packs, and body pollution. In other words, it's an absolute blast for the kids, whereas we parents, have to grit our teeth and get through it. My wife had to work, so I was graced with going to it alone, which makes it even less desirable. The gym is outfitted with a DJ who, like all bad DJ's turns the volume up a notch for every song, so that by the end everything sounds like Alice in Chains on 'leven. I kid you not. By the end of the night, I wasn't sure if it was Miley Cyrus or Ozzy Osbourne screaming at me. I think it must have been the former, because the student selling girl scout cookies was mouthing every word. This is weird, because the only word I heard was like the sound of a jet engine before it falls off a plane over the Atlantic. I think it's probably hard to mouth that sound, but she was. I'll give
Post a Comment
Read more

Houston we have Liftoff

March 04, 2010
Well it happened. The Wisconsin Verse publication accepted my poem "Anyone Seen Sally" yesterday. Victory at last! (It really didn't take that long, actually.) They edited it slightly, and shortened my bio a bit, but that's OK, as long as it's in print, baby! It is a weird beginning to a long, strange venture in the name of getting published. Never in a thousand years would I have guessed that it would have been a poem where I got my start, but things happen for a reason, I guess. So, the question is, how do I follow this up? Time will tell with that as well. Alas, other things call for my attention now, so I'll have to save the full post for this weekend. In the meantime, please support the publication at www.wisconsinverse.org Blogging off...
Post a Comment
Read more

March 02, 2010
I just got a notice from versewisconsin.org that they are considering a poem of mine for publishing. Not going to get too excited until I see it in print, but this is a good start. Will keep you posted, in the meantime, support the arts at: http://www.versewisconsin.org Life is good! Onward... Blogging off...
Post a Comment
Read more
More posts