September 12, 2019
In my work in progress book about my days at Cretin High School I talk a little about another job I had at The Lexington Restaurant in St. Paul. The manager of the place at the time, Don Ryan, actually lived across the street from us. His kids were pretty good friends with our family, so pretty much any of us who wanted to work there had a job if we wanted one.

I think it was late in my sophomore year that I applied and got the job as a dishwasher. Dishwashers were also called pearl divers, for some odd reason, but it was pretty much the starting position for any teenager at the place. You could work your way "up" to salad chef, busboy or even waiter if you worked hard and didn't piss off the management too much. 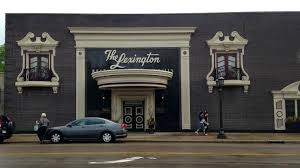 It was hard work, especially on busy Friday nights. Busboys brought in trays stacked with dirty dishes almost faster than you could clear them. There was always two dishwashers and a pot washer. The dishwashers would split duties, one working trays and the "clean end" of dish runs, the other was relegated to the hole, as it was affectionately called. The hole was where all the dirty dishes went and were rinsed and the resulting garbage sent into the garbage disposal.

I worked the hole enough and occasionally pulled some interesting things out of the garbage disposal. Bottle caps, bones and cocktail forks. The best find though was a pair of dentures. Well, it was the bottom ones anyway. It sorta skivved me out to tell you the truth. I can see how it happened though. Probably took them out to eat and wrapped them in a napkin that got shook out to the "hole."

I remember the industrial dishwasher that sent dishes out the clean end at about a zillion degrees. We had to quickly stack them and get rid of the rack because another rack was usually right behind it. It  was a little like Lucy and Vivian n the chocolate line. Between the heat and the industrial detergent, my hands peeled, cracked and dried.

But the job taught me a good work ethic. You had to work fast, hard and long hours. Some weeknights they'd stay open till 11:30 or so and after running our last load, we'd go home and try and get 6 hours of sleep before school the next day. It was brutal, didn't help my grades any, but the money was good.

I eventually worked my way up to Salad Chef. It was an upgrade from the heat and garbage of pearl diving, but had stress of it's own. I worked there a few months and then went over to "the dark side" as busboys and waiters were called. The kitchen help always called them that. As a busboy I made great tips, but again, it was stressful. Lots of heavy trays of food and dirty dishes. Then there was the time my armload of soups got caught in the "automatic" doors that were finicky to open and time your walk-through.

The restaurant still stands today. Check out their website here.

And if you should go there, tell them busboy Jim sent ya.

Unknown said…
Nice story. It brings back memories of working as a dishwasher, busboy, cook, and waiter at "The Brothers Restaurant and Deli in the Highland Park strip mall on Ford Parkway next to Lunds and Byerlys. Your blog brought back vivid memories of slaving away at the hole of the dishwasher, which are a combination of good and bad memories.
September 12, 2019 at 4:49 PM