A Heart 2 Times Too Small 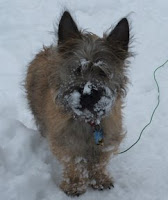 I stayed home from work today, sick with a head cold. Ben was sick with a stomach thing too, so it was a boys "Ferris Bueller's day off" today. I HATE getting sick. I don't expect anyone likes it much.

Last night as I was walking home from another forgetful day at work, I came across a stranded Carroll College motorist who's car was dead in the middle of a busy street. A woman had stopped to help, but both of them were just standing in the street looking at each other like God was going to magically jump the kid's battery without provocation. When I joined the deer-in-the-headlights party I suggested we PUSH the dead car out of the intersection into a nearby lot. Let's move everyone out of harm's way shall we?

So this student finally comes to and says "Yeah, I guess we could". Yeah let's, I think. So he gets in and steers while this poor woman and I push. Evidently he's never seen the open-the- door-and-push-and-steer method, but preferred the comfort of the drivers seat. I thought he was going to ask us to make "Rrrrmmmmmm" noises.

So we get the car most of the way into this unplowed driveway. It's rear end was sticking out a ways until some other young 20-somethings walking by came and pushed him up out of traffic entirely. Don't say young people don't care about anyone but themselves. They stopped, many older drivers did not.

I let the student use my cell to call for help. He eventually got his parents. After he hung up, he said that he'd forgotten to tell them to bring jumper cables. I don't know what this guy was majoring in, but it wasn't Common Sense, that much is true.

I told him I live about a mile from where we were and that I'd be back in 25 min. with cables and if he was still there I'd jump him. If he was gone, well I'd just go home. So I walk home and get the cables and drive back. When I get there, his dad is there, but he's stuck in the snowbank coming out of the same driveway. He was hung up good on the frame of his car. How much bad luck can a family have in one day? One dead battery, one snow-beached rescue vehicle.

I ask if they still need help and his dad said that they'd welcome a jump if I could do that. I pull into the lot and almost get stuck myself. After we disagree a bit on the proper battery jump connection sequence, I was able to successfully jump the dead car. After being reassured that his wife was coming with their SUV to push the snow-bound car out, I wished them luck and Merry Christmas and was on my way.

The moral of the story is that you need to look for opportunities to help people. If that was my son out there, I'd want somebody pushing his dead car out of traffic and borrowing them his cell phone and then following up with a jump. I don't tell this story because I want accolades. I'm just saying that we can all touch others, complete strangers sometimes, if we just think about someone other than ourselves. I had a cold, didn't feel very well, and very easily could have walked right by this guy. Maybe the kid will remember this random act of kindness and pass it on, maybe not. The point is doing it because it's the right thing to do.

One of my New Years Resolutions is to get out of my bubble more like this.
Blogging off for now...
Jim