April 17, 2014
For throwback Thursday, I came across this photo of The Lexington restaurant the other day. It spurred so many spontaneous, good memories, I had to save it as a picture of my own. While it wasn't my first job in High School, it was my first long term job. I actually started working as a freshman at a gas station/car wash combination named Tu-Way Car Wash. Gas was .49 a gallon, and an automatic wash was a few bucks. This particular car wash had hydraulic brushes that required human intervention to stop. For some reason, when I went to stop the upper brushes on several occasions, the system didn't work.

Oh yeah, I ripped off a few antennas in my day, lemme tell ya. 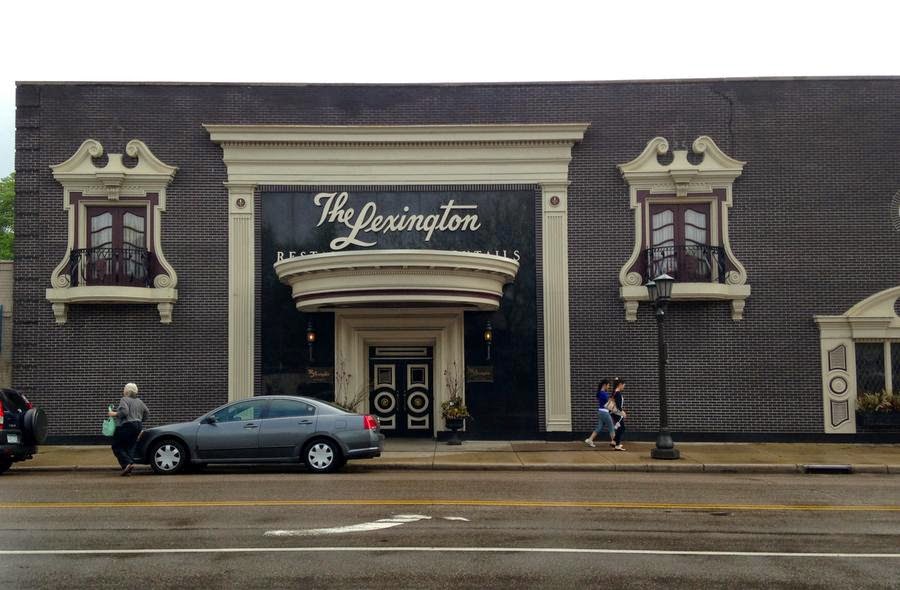 Once I had a guy come in with a sweet Dodge Charger or GTO and because these friggin' brushes didn't stop when they were supposed to, I ended up turning his hood ornament all the way around so that the little bulldog or whatever stupid thing it was, was looking right at the driver. Justifiably, the guy was upset. Probably more upset that a 15 year old was in charge of the entire joint at that point, which I was. It was an early lesson in customer relations, one that I'd prefer to forget.

Anyways, at last sighting, the guy was outside the wash fiddling with his ornament trying to make it face forward. Looking back, it was a real first world problem and kind of funny - for me at least. Hood ornaments were such a big thing for a while, which I think is a sign of a depraved, sick culture, but I digress.

I think my time at Tu-Way was only about 6 months or so. Thankfully, track started up at school and I had the perfect job-quitting excuse.

A year or so later, I started working at The Lexington restaurant, a fine dining establishment. Because most every High School kid that worked there started as a dishwasher, that was where I started. In the area where the dish trays were brought in, there was a long counter with a trash bin type slot so you could just pull off paper products, ash trays, and other garbage that could not go down the garbage disposal. Every once in a while a smoldering cigarette butt would slip through the process and we'd end up with what we affectionately called a "bin fire". They were usually small, smoky affairs but kept the night interesting.

On Friday and Saturday nights, the kitchen got quite busy. We'd get trays in faster than we could clear them. (I always hated the busboys when they'd start swamping the dishwashers.) Eventually things went down the garbage disposal that shouldn't have. The occasional bone, a bottle cap or spoon. The creepiest thing I ever pulled out of it though was a set of dentures. Yuk! (My first thought was, "Where'd the rest of the guy go?") When you're dealing with hundreds of pounds of garbage a night, stuff like that tends to slip through.

Eventually I moved up to Salad Prep. Lots of good memories of working alongside my friend Pat in that spot.

After a short stint in that position, I again moved "up" the corporate ladder to busboy. The funniest tragic story I have from my days as a busboy involved a set of automated doors going into the dining room. If you didn't hit the right spot on the floor, the doors wouldn't open. If you hit the spot wrong, they would only stay open briefly.

Well, I had a whole tray of French Onion soups one evening, heading out to the party room. I hit the floor trigger, but not good enough, and the cursed doors closed on my arm, trapping it and forcing the tray to tip and slide all the soups to the floor. While this was certainly tragic from my end, I can't help but thinking of what it looked like from the dining room vantage point. An arm and a tray squashed between two doors. I imagine it was quite a sight.

I was not the only victim of those doors. They took many, in different ways. Evil doors. Hated the doors.

There were a ton of other untellable tales from the kitchen of one of the city's finest restaurant. If you get me alone sometime over a malted beverage, ask me about them sometime.

As my son begins to look into getting his first job, he's got these kinds of things to look forward to. I always said, that it's good incentive for finishing high school and college. Because, arm-crushing soup spilling's a helluva way to make a living.

Unknown said…
Loved the Lex, great visual about the evil automatic doors and dentures, yuck. Praise to the new investors who saved the Lex
April 23, 2014 at 11:01 AM