April 06, 2014
As I mentioned last Sunday, I thought I'd take a character out of my book every week and give a little background to them. Also like last week, I'll try not to regurgitate what is in the book about this character, but rather share some personal experiences I had with him or her over the years. Today I'll talk a little bit about my brother Paul. The second section of Dirty Shirt: A Boundary Waters Memoir is spent outlining trips I took with some or all of them over the years in the late 80's and 90's. Paul was there for those trips, but not for the later ones, so references to his character come and go.

Paul is the youngest of the seven kids in our family, four years younger than me. He always refers to himself correctly as the last of the boomer generation. (Born in '65). Like most families, most of the siblings would say he got away with things they wouldn't have - that they paved the way for him - and to a certain extent it's true. I wouldn't say he was spoiled, because no one in our family was spoiled. With seven kids there wasn't much time or money for spoilage. Equal treatment all around.

While no one in the family ever much excelled in the arts, Paul was the closest thing to the "artistic one" as we came. He got his degree in Landscape Architecture from the University of Minnesota in the late 80's. I remember some of the projects he had for his art classes and how well he put them together. He had an eye for color, structure and juxtaposition that I just never had. Like most artists, he threw his whole self into his projects and get lost in them. Occasionally he'd realize that it wasn't coming out how he intended and he'd scrap the whole thing and start over. He was a perfectionist with high standards for his work.

I believe the whole idea of a brothers boundary waters trip was spurred by Paul. Like the rest of us, he loves the outdoors and he knew we would be fairly compatible, having grown up around each other with our little quirks and idiosyncrasies. It turned out he was right, and what transpired over the next five years was transformational in bringing us brothers closer together. This idea forms the core of the book. 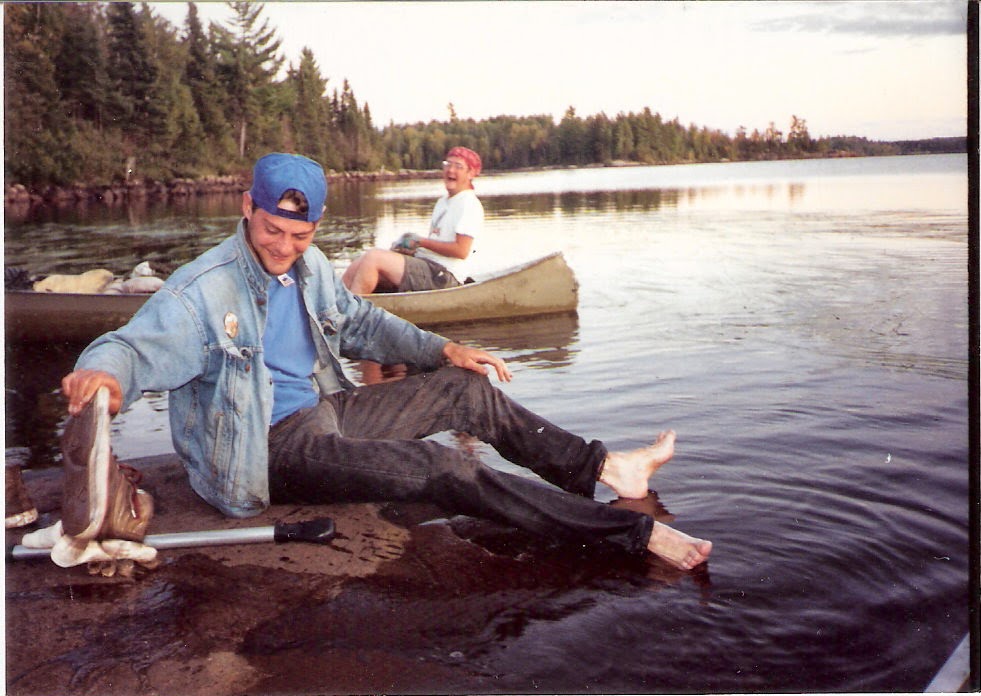 When I say I didn't really know my father, I need to realize that I have nothing to complain about. Paul and to a certain extent Rob, have virtually no memory of dad. Paul would have been about 18 months old at the time of his death, so he has nothing but pictures and stories of dad to rely on. Perhaps the ironic thing in all of that is that of the four brothers, Mom always said that Paul was the most like dad. His demeanor, his restlessness, and his temperament. She said sometimes when she sees him standing, it's eerie because he even stands like him. A good argument for DNA if there ever was one.

I guess one of the most memorable experiences with Paul would have to be the Landwehr Hunt in 2006 in Dent, Minnesota. The Landwehr Hunt was held every year on this farm in remote northwestern Minnesota. It was a tradition started by my dad and his brothers and, as the brothers started dying off, it was later carried on by the surviving sons. The "Hunt" was a loose term for what really went on. There were years when guns were not even brought up. It was really just a card playing, beer drinking weekend in mid-October every year. Anyway, the year I went up was a blast. I was new to the tradition, while Rob and Paul had been up a time before that. Somehow after a night in town shooting billiards and telling stories, we ended up in the out-of-use round barn of the Gonya farmstead that was the crown jewel of the property. A beautifully constructed barn with high, vaulted rafters and it's unique round character.

So, at one point we moved to a room that Paul called the "killing floor". He said it was where my "baby back" ribs got their start, and then proceeded to make little piggy squealing noises. Rob and I chuckled and I said I didn't believe him he only made more squealing noises, which brought me to laughing to the point of tears. You really had to be there and part of it was the beer laughing, but it was one of those juvenile, silly, brotherhood moments that I will never forget. It was the culmination of a great weekend with him, my other brothers, cousins and uncles. It was Paul's sense of humor at it's zenith.

I've said it many times that the older I get, the more I realize I'm lucky to have been part of a big family. Paul was a big part of my life throughout my school years and the Boundary Waters trips brought us even closer. If you want to hear more about Paul, you'll have to read the book. His humor, mechanical aptitude and artistic flair are present throughout. I'm glad he brought up the suggestion so many years ago. It was the start of a great tradition.