Coming Up for Air 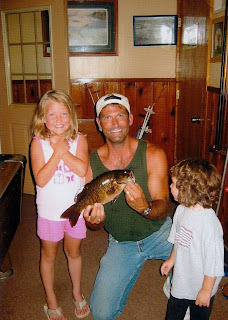 It has been a brutal couple of weeks. As most of you know, my brother passed away on Tuesday, August 30th after a long, courageous battle with cancer. Much has transpired since then, too much to list here. I do want to talk a bit about our trip to Mercer, WI two weeks ago.

On Tuesday, when my family gathered at my brother's house to support each other, the idea was postulated that maybe it would be a good thing if they all went up to Mercer to be with us and heal as a family. When we got word that that was going to happen, we were very excited. Because of Rob's quick passing, I never got the chance to get home and be with my family during their grieving. This would give them the opportunity to come to me, in some respects.

We drove up on Friday after work with our friends Jill and Steve who had planned to come with us all along. They were fairly trepidatious about the thought of being caught in the middle of our family's mourning. We assured them that we wanted them there to support us and hoped they would carry through. They did and it turned out to be a good thing for everyone.

After unpacking, settling in and saying hello to sister in-law Jane as well as John and Cheri, the proprietors, we went down and said hello to my family. Steve and Jill were reluctant to do that, but were gracious enough to carry it through. When they did, they said that the whole experience of meeting my mom and some of the others in the family was touching for them as well. Steve lost his brother (47, same age as Rob) to pancreatic cancer last December (2010). He said he was touched by my mother's mentioning his loss and her genuine nature about both of our situations. It made me proud to be called her son, and proud to be called his friend. Jill was moved by the whole situation as well, and it was really, really good to finally introduce my good friends to Mom.

After introductions, Steve, Jill and Donna saw to it that I spend time with my family out on the deck of the big family cabin, while they went back to our cabin. I went back and there they all were, Mom, Tom, Pat, and Jane. Paul didn't get up until Saturday, but the rest were there. Just being there was absolutely healing. Laughing with them, telling stories of Rob and sharing other family memories and just being around them was therapeutic. It was a night to remember...and part of a morning too.

There was much fishing all weekend long, with few results as expected at this very difficult lake to fish (Spider Lake). One of the funnier things that happened was that over the course of the weekend, Steve's fishing rod kept falling out of the boat into the water. The first two times he lunged over the boat side to grab it before it sunk to the bottom, and each time he got it. The third time was at night and I managed to hook his rod with my very large musky lure on the back side of a cast. When I flung it forward he said "Jim, that's my rod!" as it flung into the water in front of me. I reached over with my own rod and managed to hook it before it sank to the bottom.

It was then that we joked that Rob was playing with us and seeing to it that our rods were always falling overboard. We said he was jealous that I was already fishing with someone else, and to make matters worse, I was doing it on "our lake." It was a lightening joke to an otherwise heavy weekend.

The weekend had so much more to it. So many layers of grief, sorrow, healing, renewal, growth, memories and memory making. As time goes on, I'll try and recount some of those on this blog. For now though, I'm going to slog forward, grinding through my grief and sadness and try and see where I land when the dust has settled on this incredible loss in my life. Rob's passing has made heaven so much more real to me than it ever was, and for that I am grateful. At the same time, there are moments in every day when I cannot believe he is gone. Fortunately I know that the former is where I know we'll meet again, and that is the source of incredible hope and relief for me.