A Slightly Above Average Weekend 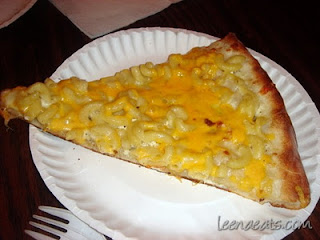 It was a fairly average weekend. At the same time, I'm learning to appreciate average in ways I've never known before.

Friday night I had the house to myself for about 3 hours. Ben had a sleepover and Donna and Sarah had to work. It was a chance for me to write a bit, surf the web, listen to the stereo at my own level and just be alone. I'm one of those people who's very comfortable being alone and tends to want to do too much when it happens. This time I allowed myself to do just enough. It was great. While the alone time was good, it was nice to greet the girls when they got home too. We just had pizza and hung out.

Saturday morning was filled with the usual busyness. Cutting the grass, cleaning the house, walking the dog. In the afternoon we  all went down to the east side of Milwaukee for Ian' Pizza for a kind of belated birthday lunch for Sarah. I had a slice of Mac n Cheese pizza that was really, really good. A strange combo, but divine. I split a second piece with Ben and got Chili-Cheese-Frito's Pizza. Again, strange but really good. I love that part of town and miss being around it. So much vibrancy and character compared to Waukesha (though Waukesha is leaps and bounds ahead of where it was 10 years ago.) After lunch we took a walk along the shore of Lake Michigan in 55 degree weather. From there we went to Alterra for coffee and had some great face-time with Ben and Sarah.

I learned to not take for granted the great city we live near and the great lake its on. We are incredibly fortunate.

Today we woke and went to church like any average Sunday. As we sometimes do after church, we went to the Steaming Cup for coffee and cinnamon rolls. This has become one of my favorite venues lately. I don't know if its the atmosphere or just that when I go I have the undivided attention of my wife (if I go with her) or my kids if they are there. The coffee is good and it's a good way to slow down our Sunday after the rush to get to church.

I learned that as much as I like these trips for coffee, its something the kids will probably always remember with great fondness.

Tonight I led my small group for Mosaic again. I played dodge ball until I nearly had a heart attack. I have to remember that I'm not 13 anymore and at 6'5" I am a BIG target. A couple of times I was so gassed I had to take a knee. Between the adrenaline and chucking dodge balls with all my might, I get gassed pretty quick. Took a shot to the face, two to the chest and one in the crotch tonight. As I said I am a big target. A bit slow moving too, evidently. It was a blast. Then after the message our small group met and had a fun yet deep discussion. They are a really well behaved group of kids, and I'm glad to be part of their lives, albeit small.

I learned that although I never thought I'd want to lead teenagers, God had different plans.

So, never discount the value of an ordinary, average weekend.