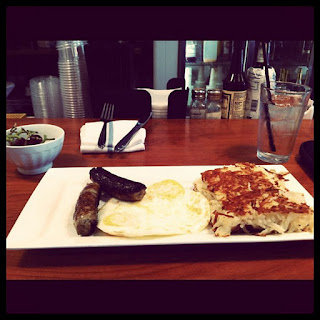 I had breakfast at Blues Egg with a couple of close friends this morning. The food was great as was the company. As a trio, we're going to try and make it a monthly thing, getting together and talking about life. All three of us have been in Bible Studies and/or some sort of men's group in the past and while they have all been relatively good experiences, when all was said and done, we didn't come away with any close true friends. We've got friends who we see at church or who we respect, but none that we would call buds. It's not to say that those groups don't build those kinds of relationships, I'm just saying that none of us had that kind of luck.

None of us are the types to call each other a couple times a week, as we're not big phone people. We will frequently text during a football game we're watching or attending, but that's about as personal as we get. (It's a guy thing). We're all busy and trying our best to be loyal spouses, good dads/uncles, and great employees. That takes effort enough, and while we don't keep in constant contact, these are the guys who I know have my back.

We all met through our wives, in kind of a roundabout fashion. They, like me are both Christians, and value the three F's as much as me. (Faith Family and Friends in that order). We share similar political views, but don't always agree about everything. There is enough respect though, that we're able to agree to disagree. This past year we have all celebrated at least 20 years with our spouses, which shows that we locked into the marital bonds with a sense of purpose and duty. I don't mention this to boast, but rather to point out that it is these kinds of things that hold us together. Mutual interests, values and morals.

This past year we've also all shared significant losses in our families, close siblings and parents. I cannot tell you how it has helped me having these guys (and their spouses) to lean on when things were tough. There were times where I just needed them to listen, and they did. But along with that, they sent cards, texted, watched our dog and cats, sent food, offered money, time and love. They were there when we needed them.

The wonderfully sad thing was I knew that they understood how I felt because they were going through the same thing. We were all in sort of a synchronized grief. It was horrible, but thanks to them, manageable. It's almost like the loss of a brother has led to these guys filling the hole left in his absence, or at least to slow the bleeding.

For that I am grateful.