The Real Reasons I Go Back 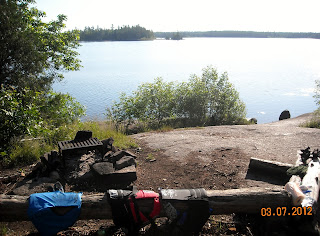 People who have read or heard some of my BWCA stories often question why I would return to such a difficult environment in the name of a vacation. It's a question that always puts me on the spot at the time, but this past trip I took the opportunity to reflect a bit on why I was there, as well as why I go there. The answers are many.

Sounds: As I sat in my canoe with Sarah in the front on many occasions, the only thing I could hear was the tinnitus in my ears. No traffic, no airplanes, no blaring stereos or Harley Davidsons blasting up the street. There were no sirens, no ringtones, no televisions, no barking dogs, and no passing trains. The wind in the tall pines and birch trees whispered occasionally. This sound is naturally rhythmic and serves to bring ones blood pressure down, rather than elevating it like all the godforsaken man-made sounds of the city. The only intrusive sounds all week was the occasional conversation of campers across the lake from us, and one rogue jet that flew very, very high overhead. It makes for a meditative environment. It grounds me. It cleanses my mind and my lungs.

Seclusion: For four days we see less than a dozen people pass by in canoes. Most of them pass in silence or, at most, give a casual wave. They've come for the same reason as we have; to get away. To get away from people and the manic pace we live at. To destroy that by pressing themselves into other people's bubble is a violation of the unwritten BW code of conduct. Keep to yourself. Respect others. Move along.

Detachment: Anything device with a plug, a screen, a keyboard or a joystick was left behind. In the woods there is no texting, no Facebook posting, no tweeting (except birds, which is actually more interesting than most tweets, anyway), no save button, no email, no remote control, no XBox, no Hulu, netflix or godforsaken television at all. (How do I really feel?). People today, and this includes me, move from screen to screen all day long. It consumes people. Up north, the kids spent the majority of their time talking to each other. Face to face cousin time, talking and goofing off. No shooting a virtual enemy or "Liking" any statuses. Just talking about the fish they caught, the teacher they don't like, laughing at the Zombie Survival Guide book that Ben brought, or just life in general. The least surprising thing is no one said they missed it. Furthermore, they all survived without any of it.

Natural Beauty: The cloud swept sunsets, lichen covered basalt rocks, the call of the loons, crystal clear water, soaring eagles and beautiful fish. Things you can't put on a screen saver and get the same effect.

Reflection: Down time during the lulls in fishing to ponder life. Where you're going, what your goals are, the meaning of life, whether you have enough leeches to make it through the week. Is it going to rain tonight, are the kids having a good time? Up north you have nothing but time to think about the big and the small; to sort things out. I thought a lot about Rob and trips we took up there in years past and how quickly that has come and gone. I treasure the memories of those trips, but at the same time I realize the importance of creating new ones with the next generation.

After all, someone has to pass down to the next generation the love and respect for relatively untouched natural beauty of the BWCA, and it sure ain't going to be Animal Planet.

The Queen Bee said…
Glad that it's you and Tom making these memories with the kids - someday they'll realize how lucky they were.
June 27, 2012 at 7:25 AM

Paul Landwehr said…
I couldn't have put it more succinctly myself. Truly miss the adventures and especially the time spent with brothers Rob, Jim and Tom in God's country. A yearly pilgrimage is worth the rat race the rest of the time spent waiting to go.
August 15, 2012 at 4:42 PM