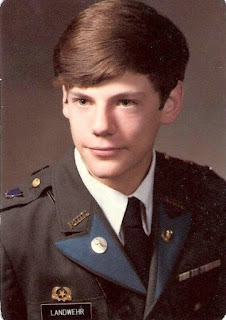 A little known fact is that I went to an all-male, military, Catholic high school. At the time I went there it was called Cretin High School. I don't think about it much until people mention their high school experience. Then when I mention mine, it strikes me how unique that experience truly was. I would like to say that it was a uniquely perfect experience, but I'd be lying. It was both good and bad, as most people's high school experience probably was. If I had to do it over however, I would likely change some things. (I'll talk about these later.)

The school is in St. Paul, Minnesota and just across "the field," as it was called, was Derham Hall, the all-female, Catholic high school. Cretin ran a Junior ROTC program using a combination of active and retired military instructors, Christian Brothers, and lay teachers. As you can see from the picture, we wore military uniforms; green slacks, tan shirt, black tie, black socks, black shoes, name tag and pocket protector (really?).

On inspection day (Monday) we wore our "blouses" they were called, (really?) but what they were was the dress coats. These coats held our rank (shoulder) name tag, medals, ribbons, cords and sabers. Our hair could not touch our ears (very cool in the 70's, as you can imagine...), our shirt collars or our eyebrows. If your shoes and brass were not polished to the liking of the inspecting officer (usually a student officer, but sometimes a military faculty), you got a demerit, also known as a "gig". Gigs added up to affect your grade. They could also be worked off doing grunt work on the school grounds after hours for either the military faculty or the Brothers.

All of this inspection hassle was a mixed blessing. On the one hand it taught me preparation and discipline. Every Sunday night, a little bit of my time was spent spit-shining my shoes or polishing my brass belt buckle and collar brass. Shirts and pants had to be pressed and dry cleaned. It was not unlike a teen boot camp in many respects.

On the other hand, I HATED it. What a drag to have to do that on top of homework, etc. I finally wised up junior year and spent $80 on a pair of chloroform shoes that I wore only for inspection day. These shoes had a toe that was like a mirror. They were a lifesaver for me because it meant never having to shine my shoes. Needless to say, I became very popular and loaned them out repeatedly. I should have charged. Ha! (I wonder what ever happened to those?)

Perhaps for me bigger than the military drag thing was the lack of being around girls during those four years. I think it is such a formative period, especially socially, for kids, that to be around the other sex is important. I think boys mature faster (or at least act more mature, maybe) when they are around girls, than not, but that's only a guess. Again, we had a girls school across the way, but there was no day-to-day interaction. We had "mixers" which were just school dances where both schools were invited, but again, nothing day to day.

I don't mean to dwell on all that the school wasn't; it was a good school. In fact, they have made it better by merging with the girl's school to become Cretin-Derham Hall. I believe the military element is now optional as well. So had I to do it again, it would probably be at the top of my list. The problem is, I could likely never afford it at today's tuition. I payed for most of my junior and senior year, with a little help from my Mom at times. Nowadays you practically need a student loan to attend. Its a sad commentary on all levels of education, but that's a story for a different time.

Looking back is a trip. I'll revisit this topic in future blogs.