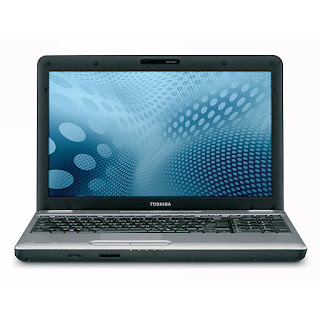 My daughter got a new laptop about a month ago. Hers was "too slow" and she was griping about it continuously until I'd had enough and told her I would go with her to get a new one. She got a fine machine, an HP Envy m6-1105dx. It has 6GB of memory and a discrete graphics card. Being the geek that I am, I like all the technical stuff that goes along with these purchases.

As part of the deal, I told her that we would buy her old laptop a Toshiba Satellite L505D-S5985 with 3GB of ram and a 320 GB Hard Drive. My plan was to replace the desktop upstairs, an aging Dell Dimension 2400 running Windows XP. Right now, we are a family with too many computers, and I'm not quite sure what to do with it.

Rather than try and figure out how to make her laptop run better by uninstalling, defragging, and cleaning up  the registry (bear with my geekiness here), I thought I'd just do a factory restore. I had all the "restore DVD's" that I'd carefully created when she bought the thing in 2009. Of course I made the backup DVD's because, it's what geeks do.

After looking online a bit, I was surprised to see a suggestion that said all I needed to do was boot while holding down the '0' at the same time. I tried this and was shocked and awed when it started to reformat, flawlessly on the first try. It then restarted and configured for the next 40+ minutes, running through each of the driver packs etc. I kept waiting for the nasty windows error that ALWAYS shows up during these restores, but it never came.

When it was finished, I was able to login the first time and started to install the updates. The laptop sings like brand new. Again, it went flawlessly, and I kept waiting for disaster. It never came.

The moral of the story is that sometimes, when the planets are all aligned, and your Karma is in a good state, and the zeroes and ones are all clicking the way they should, Windows can be a beautiful thing. I dare say, as beautiful as Mac. It's a rarity, but it does happen. And you know what? I'm going to run with it.

And so, I'd like to thank the people at the Toshiba Corporation for this one, small victory. I am always quick to criticize when software and/or hardware gives me fits, so I think it's only fair that I compliment where compliments are due.

I'd even like to go so far as to thank the fine staff at Microsoft for helping Toshiba to make this historical event so special for me, my family, Wisconsin, and America.

At the same time though, I beg of you to not let it go to your nerdy little heads. Because I know that, somewhere soon, there lies a  blue screen of death, or an initialization error, or a dll failure in my future, and it will not be my fault. Then I will curse the screen and vow to get a Mac, just like I always do.

Until then, life, for the moment, is very, very good.