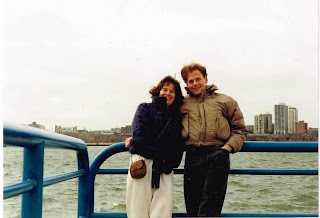 I moved to Waukesha, Wisconsin in September of 1986. I had been laid off since the previous May from Markhurd Corporation, my first job out of college. After a softball game one night in Minneapolis, I ran into a friend who had been laid off in the same wave of cutbacks as me. He said he had just been offered a job doing computer (CADD) mapping, by a company in Waukesha called Intelligraphics. He said they were doing a lot of hiring and would I be interested? I was so desperate for a job in my field at the moment I was ready to move anywhere.

Intelligraphics offered me a job that summer and so, after saying a teary goodbye to my mom, I got in my Ford Escort with a U Haul and every possession I owned in-tow and headed east on I-94 for Milwaukee. It was a long drive filled with hope, fear, joy and uncertainty. I moved in with my roommates Ken and Paul and started my new life.

Within a few months of moving, my brother Rob and I began sending letters back and forth. He was enrolled at the Rochester Institute of Technology (RIT) in upstate New York. It was nice getting letters from him and, because he was displaced as well, we had a fair amount in common to write about. In one of his letters, he included letters from 3 of his girl "friend" floor mates from his dorm. The were Jeryll, Jackie, and a girl named Donna. He told me that he had mentioned to them that I was new in Waukesha and didn't really know anybody, so would they write him a letter and say hi?

I don't remember exactly what each of the three had to say. Most of the letters were introductory in nature and seemed like honest attempts to be nice and cure me of my homesick loneliness. They were all away from their families as well, and we were all close in age, so had music, books and college life in common to talk about.

I was, of course, flattered that 3 women would take the time to write, so I wrote each of them individual letters back. Only one wrote back.

For a year and a half.

Donna Marie Neufang and I became 20th century pen pals of sorts. This was before the age of e-mail, faxes, texting and Skype. Long distance was expensive. Postage for letters was about a quarter.

So we wrote, and we wrote, and we wrote. Short letters, long letters, letters about the trials of college and a new job, and roommates, and philosophy and religion, family, music, and books. We shared joys, concerns, doubts, beliefs and bad jokes. One of the things I recall her liking was my "Random Observations" which  covered most subjects under the sun. Near the end of of our writing things got a little spicier and flirtatious, neither of us knowing what the other would think, but daring to "go there" nonetheless.

I sent her letters on the back of scrap maps from work, letters on notebook paper, and even a letter on toilet paper as a joke. She always sent cards on holidays and birthdays, and on one occasion, she sent a scarf as a birthday present, which touched me deeply. It was nothing special, and she may not even remember sending it, but to know that someone that far away cared, meant a lot to me.

Then one day she called. She said she was thinking about paying a visit and wondered what I'd think? I of course said I would love to see her. Both of us knew it would likely change our relationship forever.

I greeted her at the airport with a single red rose. We went to dinner at the Chancery and out to see the movie "Light Years" at the coolest theatre in Milwaukee, the Oriental. On the way home, "our song" came on the radio in the car, oddly enough, because it wasn't a big top 40 hit. When we got home we stayed up late and talked, and talked.

The next day we went to the lakefront where we fed the ducks, walked Brady Street, went to the Domes, stopped at Leon's Custard Stand, and that night she cooked me dinner, Chicken Parmesan.

It was a weekend I'll never forget and somewhere along the way, we fell deeply in love.

Some say that we put into writing things that are too hard to say in person. They say that we reveal parts of ourselves that we might hold back in conversation, I know I did. To this day she says that my words were what attracted her to me. Well, there must have been something in hers that drew me to her, as well.

We met 25 years ago this weekend. I am eternally indebted to my brother Rob for giving me the second half of my life by writing a simple letter.

And I'm forever grateful to Donna for writing me back.

I Love You, Donna.