The Halls Of Time 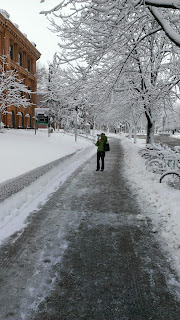 Last weekend, among other things, we took a trip up to Minnesota for a University of Minnesota tour for my daughter Sarah. It's hard to believe she's looking into such things, as it seems like just last month I attended her preschool graduation ceremony. They grow up fast, to be sure.

Minnesota stands to be her college experience. She really liked everything she read on it before she left. It has a great foreign studies program, including a wonderful study abroad program. A somewhat bigger determinant might be that she'd be close to a lot of family. I graduated from "the U" in 1985, so would like nothing better than to see her close to family, attending the school that I did. It would make me incredibly proud.

We arrived on campus plenty early for the tour. I was shocked and awed by all the changes on campus. The first thing that caught my eye was the new TCF Bank Stadium. It was beautiful. It sits in a different spot than the old Memorial Stadium that I knew and love, which was in the middle campus, essentially. Hopefully they can get their football program turned around in my lifetime and make it pay off. (As an aside, I was there a couple of years after Tony Dungy was the quarterback at the U. This gives you a frame of reference for how long it's been.)

Incidentally to add an interesting twist to the tour, it snowed 8 inches the night before, April 18th. I thought to myself, if Sarah can like this campus in this climate, then she'll be fine. At one point on the tour, she said to me through chattering teeth, "This is cool. I really like it."

A true Midwesterner, she is.

Before the tour started I had some time, so I asked a passerby if Williamson Hall was still the bookstore. He told me no, that the bookstore was now in Coffman Memorial Union. Well, they never got my permission to do that now, did they?

Another big change was the addition of light rail lines cutting through campus. Because it's not full operational yet, it's causing just a whole lot of dead space and logistical workarounds. It is a phenomenal idea and I think it will be great when it's running, it's just jumbling things up a bit right now.

After a quick presentation in Jones hall, our tour guide took us around. Now, understand that I never really got a tour of the campus until Freshman welcome week. Nor did I tour other colleges. It was pretty clear from the outset that my brother had gone to the U, and I would go to the U. (And Paul would too.) It is a different time here in 2013.

Our first stop with the guide was Cook Hall and the brand new adjoining Recreation Center. Lots of treadmills and aerobic machines and a nice Olympic pool to round things out. All of it is included in student fees, so that is a nice perk. With tuition costs what they are, you have to look for the small victories, so I'll take this as one.

Stop two was a residence hall. Nothing earth shattering there. Small rooms, lots of students, ping pong, food service, computer lab and a laundry area. I lived at home, so I had much the same for free. (Thanks Mom!)

There's much more to cover, so I'll save it for another blog post.

Suffice it to say that my daughter's experience will be MUCH different than mine.