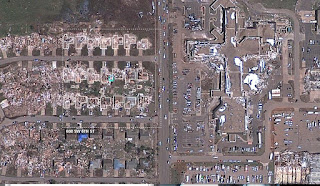 Being in the GIS and mapping world for as long as I have, I have a tendency to want to use maps to solve a number of different issues. Maps can make boring, dull data into a vibrant picture that actually tells a story. While you don't often think of it most digital data has a mapping component to it. Customer base equates to a list of addresses that can be geocoded to tell you where they are coming from. Voters can be tied to demographic data (at times). Crime can be mapped using a pin map and, when there's lots of violent crime, the pins can be ranked by severity. The severity can then be calculated into a "heat map" showing hot spots of high crime.

I came across a really cool map today that shows where the building footprints would be for the areas of tornado devastation in and near Moore, Oklahoma. While this is more flash than not, it could be easily tied to a land/improvement value file and the values of the homes lost in the disaster could be calculated.

As I continue to work on my Boundary Waters book, I began to think that it would be well served to show some maps of my own. I thought about using an ESRI map because that's the software I use at work. It turns out that it's just as easy to use something people are familiar with like Google maps. I know enough about Google maps that I thought I would try and make my writing site a little more interactive by adding some maps to it. All it would take is to create some points, lines and polygons on a map and then create a link to the saved map on my personal writing website.

Furthermore, from there I could link pictures from the various trips to locations on the map using web folders on Picasa. As part of my research for my book, I've back-scanned many of my 1980's and 1990's BWCA photos. Once they are on Picasa, they are "web ready" and I could link my points of interest to them.

I set to to work tonight on them and got a couple of quick "proof of concept" maps done. One is on my site under the BWCA Maps tab. If you click on the launch point you get a photo that is linked to Picasa. It is a photo taken at the Chainsaw Sisters saloon on that fateful Labor Day so many years ago.

My attempt at making my second map went a little awry, as things frequently do in the mapping world. I digitized my entire route for the 1979/1980 trips using Google's finicky line command. Because I messed up in a couple of spots, I had to "add vertexes" to the line in order to smooth them out. In doing that somehow I go what is known in the GIS world as a "zinger". They are lines that shoot off into never land. I haven't quite been able to figure out how to fix it yet, short of retracing my whole route again. Ugh.

You see, this is starting to seem a LOT like my day job. :-) When I come home I don't really want to do a lot of mapping. At the same time, I love maps, and I think it would be so cool, so I'm going to keep at it. Keep your eyes on my writing page to see how it comes along.