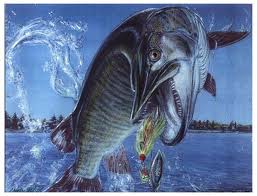 I made one of the brasher decisions in my life a couple of weeks back. I got a tattoo. This wasn't some spur of the moment decision like the movie Hangover II where Ed Helms gets a Mike Tyson tattoo during a blackout. I have been thinking about getting a tattoo for a year and a half. There was real thought that went into both if I would get one, and what I would get if I did decide to. Part of me was intrigued by the thought of doing something no one would ever guess me to do in a million years. The other part was concerned what people would think. That's where my brother came in.

When I mentioned that I was thinking of getting one, my older brother said, "Why not? You're 50, who cares?" I had the hardest time finding an argument against his reasoning. When I mentioned it to my wife, she said she had been thinking about getting one too. When my mom heard about it she said that maybe she would get one too. She's 80. Her attitude was much like mine. "I'm 80, why not?" I love her spirit.

It was becoming a bit of a family affair. I talked to my nephew who knew an artist who would give us a deal and give us a deal, and so it was set for April 19th.

I knew I wanted a musky and I wanted it on my shoulder above the sleeve line. I figured on it being about 5 inches long by an inch and a half high.

I knew I also wanted a date worked into it somehow. The date is 10/14/11, which is my brother's birthday and the date I caught a musky in his honor. He died on August 30th of 2011 and I caught the fish about 6 weeks later. I wanted a tattoo that meant something to me. I didn't want a skull and crossbones or some mindless art. If it doesn't have meaning I'm not putting it on my body.

We got to Anchor's End at 4:00 on Friday. Because there were 3 of us in our party (and my sister and niece tagging along as gawkers) they split us up. Mom got Daniel  for her anklet tattoo while Donna got Aaron, the artist that also did mine.  Mom got a simple, but very cool design of an anklet with 7 hearts, two of them hollow for my sister and brother who have passed. Donna opted for a single word "hesed" on her wrist along with a small red cardinal bird. Hesed means the pursuing, loving kindness of God. Like me, both of them chose designs that were deeply meaningful to them. Because their designs were simple they were both done in about forty five minutes.

Aaron saw what I was thinking of for artwork, then came upon a similar one on the web that was even cooler. (See above). When he printed out the template, it seemed way bigger than I anticipated. Then he printed out a bigger one. I got a little nervous, but when he described how it would sit on my shoulder, I got jazzed and said let's do this! Go big or go home, right?

The studio is really clean and modern, very nice. The process really didn't hurt as much as I feared. Oh, it hurt at times, but seriously, most of the time it was just like a real annoying scratching. They had the Red Hot Chili Peppers on for the first hour of it, so that helped. We talked for the first couple hours and then, for the last half hour it was pretty quiet. Just grinding it out; gettin' it done. Aaron was great throughout, answering questions, joking a bit and making sure I was comfortable.

I'll tell you one thing though, it gave me a new found respect for the tattooists of the world. These guys are not only phenomenal artists, but their job is physically demanding as well. A lot of awkward positioning, bad posture and repetitive motion. The other thing that shocked me was the number of colors they used and the number of times he had to change needles. At one point I thought he was done, and he said no, that he was only halfway and just taking a break. That's when I knew this was going to be really good.

When my sister came in to check on me she just laughed at how big my tat was turning out to be. It really didn't bother me though. After all, muskies ARE big. Besides, people kept telling me that to get good detail, you have to go big. So I did. And I love it. I have no regrets whatsoever. It is in a spot that I can show when I don't care and hide when I do. It is now a part of me. I love fishing, I love my brother and I love art. This brings all three together in a place where I can see it everyday.

Here's how it turned out. 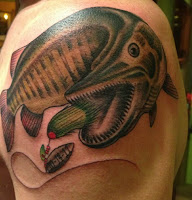