We had friends visit us from New Jersey this past week. They drove all the way from NJ, about 14 hours altogether, and stayed at our house for 5 nights. The couple are college friends of my wife's and they hadn't seen our house in 18 years. Their visit spurred the realization that Milwaukee and Waukesha have a lot to offer as Midwestern cities. It's true that neither is Chicago, nor intends to be. Chicago is it's own slice of great, but these two cities to its north have their own good qualities too.

Tuesday was dedicated to showing them a bit of Milwaukee's vibe and culture. We started by taking a tour of the Guest House, the downtown homeless shelter that I've written about in the past. Our friends, Jon and Janine had baked a ton of cookies that they wanted to donate to the lunch program at the house. Our friend Eric works at the house and was generous enough to take us on a tour. We got a behind the scenes look and story of what it takes to feed, house and counsel over 80 men on a rotating basis. It was uplifting to hear Eric tell of the efforts and successes of the Guest House's programs. It showed them that on top of all the city has to offer in the way of arts and entertainment, it cares about its own.

From there we moved on to the Milwaukee lakefront. As we drove along it, they were amazed at the beauty of the lake, but perhaps more importantly that the view of it along Lincoln Memorial Drive was so open and exposed. Much of this is attributable to the foresight of Frederick Law Olmstead and other landscape architects who had the vision and saw the value in preserving park areas for the public good. Jon mentioned the vibrant difference in the blue waters of Michigan and it was again driven home that we are lucky to be this close to one of North America's biggest natural water bodies.

We stopped for coffee at Collectivo (formerly Alterras on the Lake) for coffee and cookies in the early afternoon. This coffee is a local favorite and despite the clunky new name, is a business that was born and bred in Milwaukee. It's also proof that people WILL support a local business over a corporate conglomerate like Starbucks if given the chance.

From there we went to the Milwaukee Public Market and the Old Third Ward. Oddly enough I had not even been to the Market before and found it to be much nicer than I thought. It has tons of artisan foods from local purveyors and was bustling with a late lunch crowd to boot.

The Milwaukee Public Market is a little gem inside a bigger gem known as the Third Ward. This area is packed with great restaurants, galleries, bars, stores and antique shops right downtown. We shopped and walked around enjoying the mixed architecture and the energy that the area pulses with.

We ventured over to the Walker's Point area for a quick ice cream pick-me-up at the Purple Door Ice Creamery. This is a relatively new ice cream purveyor in downtown offering eclectic ice cream flavors like Whiskey, Blueberry Buttermilk and Raspberry Green Tea. Again, proof positive that if you produce a good, locally made product, people in Milwaukee will embrace you and support your cause.

We closed out the evening with a quick trip to South Shore Park in Bayview where we had another breathtaking look at the lake as well as a view of the city Skyline from the south. From there we went out to a Tapas dinner at Pastiche Cafe' in Bayview. The food was phenomenal and the restaurant sits in the midst of what might be the hippest part of Milwaukee at the moment, Bayview. Young and old mix it up in this neighborhood as art meets life along busy Kinnickinnic Avenue. 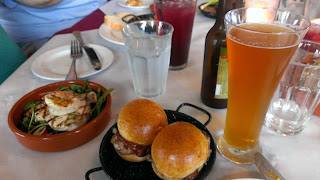 The rest of the week was spent walking among the quaint shops of Waukesha, enjoying the beauty of structures like the Calatrava and eating the regional favorite frozen custard from throwback storefronts like Kopps. It made me realize how lucky I am to live where I live. Milwaukee has the "big" appeal of Chicago with a small town charm to it. Waukesha takes both of those down another level to create its own kind of cool.

This is my home and I'm glad to be part of it.