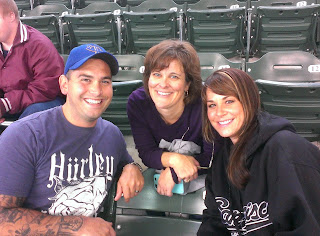 I got to spend a few hours with my nephew Nick and his wife today. They were in Madison and decided to make it a full weekend and came down to Milwaukee for a Brewers game. Nick has always liked the Brewers hearkening back to his college days when he used to come down for games when he could.

Nick is my godchild and we've always had a pretty close relationship. Over the years we've continued to make a point of getting together whenever we're in each others' range. We've been through some hard stuff together, but a lot more good stuff than bad.

We were recounting today how when he met my fiance' (at the time) Donna for the first time, I said to him, "This is Donna, she's going to be your aunt." Because Nick wanted no part in sharing his uncle with anyone, he said "She's not going to be my aunt."

Out of the mouths of babes.

Nieces and nephews are weird, beautiful things. When they are young, they're like rent-a-kids. You can have lots of fun taking them places, sugar them up real good, and send them back to their parents. They're like checking books out from the library, except there's no fines involved. If you don't have kids of your own, like I didn't through my 20's, they're a good way to test drive how you like parenting. Luckily I had some really great experiences with my nieces and nephews that convinced me that being a parent was a good fit for me.

I have 12 nieces and nephews all together. They vary in age from mid 30's to early teens. Their personalities are all over the map, much like their ages. As they've grown up, we've all stuck pretty close together. When Nick and his sister were both college students at UW Madison, we opened up our house whenever necessary so they could do their laundry, get a hot meal or just get away from school for a weekend. 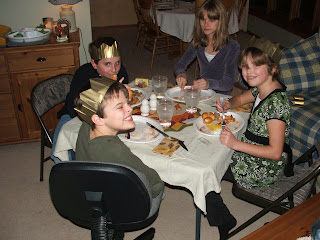 Now, with our daughter going to college, most likely in Minnesota, my sister and Nick and Steph have said that it's their chance to pay back some of our hospitality to that we showed to them over the years. Aunts and Uncles looking out for kids, then nieces and nephews looking out for one another. That's what family is all about.

Our kids love their cousins that are their same age, but lately have come to really appreciate their older cousins now too. They can relate to them because they are closer to their age than us, and they have that whole cousin-gene in common.

I also have a niece and two nephews in California. While we don't get a chance to get together much, we do see each other at the ESRI Users Conference every year. It's just a matter taking time out to see family whenever we get within each others' radar. It's important and we always make a point of it.

We also have some friends who our kids refer to as "aunt" and "uncle" even though they aren't. They are good friends who are like family and never had kids of their own, so consider ours like theirs, if that makes sense. They used to get to "rent the kids" when we wanted to get out of town for a while and our kids loved that time they got to spend with them, and vice verse. Like a real aunt or uncle, they could spoil them and then return them.

I guess my point is, don't take this level of familial relations too much for granted. I am lucky to have 12, but all it takes is one special one to help you appreciate your brother's or sister's kid and all they bring to the table. Mine are all cool in their own ways and I can't really imagine life without them.