I'm back from the Ninth Annual (my third) AllWriters' Retreat held near Glenview, Illinois. I've written about it before, but every year brings something new. I always return from this retreat exhausted, but grateful and inspired. This year is no different.

One of the bigger highlights of this particular retreat was the sheer amount of writing I got done. I figure I finished 24 pages, which by most writer's standpoint is probably pretty underwhelming. For me though, it was actually better than I anticipated. Furthermore, I was really satisfied with the quality of what I was writing. I've always said, I know when my writing (in this case, humor) is strong because I actually laugh out loud at times. I had complete pages that were like that, that I felt strongly about - that didn't feel forced. When the writing comes viscerally like that, it is really cool, and I can barely get it down fast enough.

I know it's a weird, geeky, writer thing, but it's fun. It makes some of those long, stare-off-into-space- moments-drawing-a-blank a little more bearable.

As usual another highlight was the people. There were the familiar old faces, friends from Massachusetts, Michigan, Ohio, Texas, Wisconsin and Colorado. These are the "core" group that make it every year, the stalwarts, the foundation. Good folks and amazing writers.

Then there were the new additions, students I may have met in passing or maybe not at all. They came from Minnesota, Ohio, NY and Illinois. Most were apprehensive at the start of the retreat, but by day 4 they were as comfortable as the rest of us. A couple of them read during the "showcase reading" and did really, really well. Good folks and new friends. 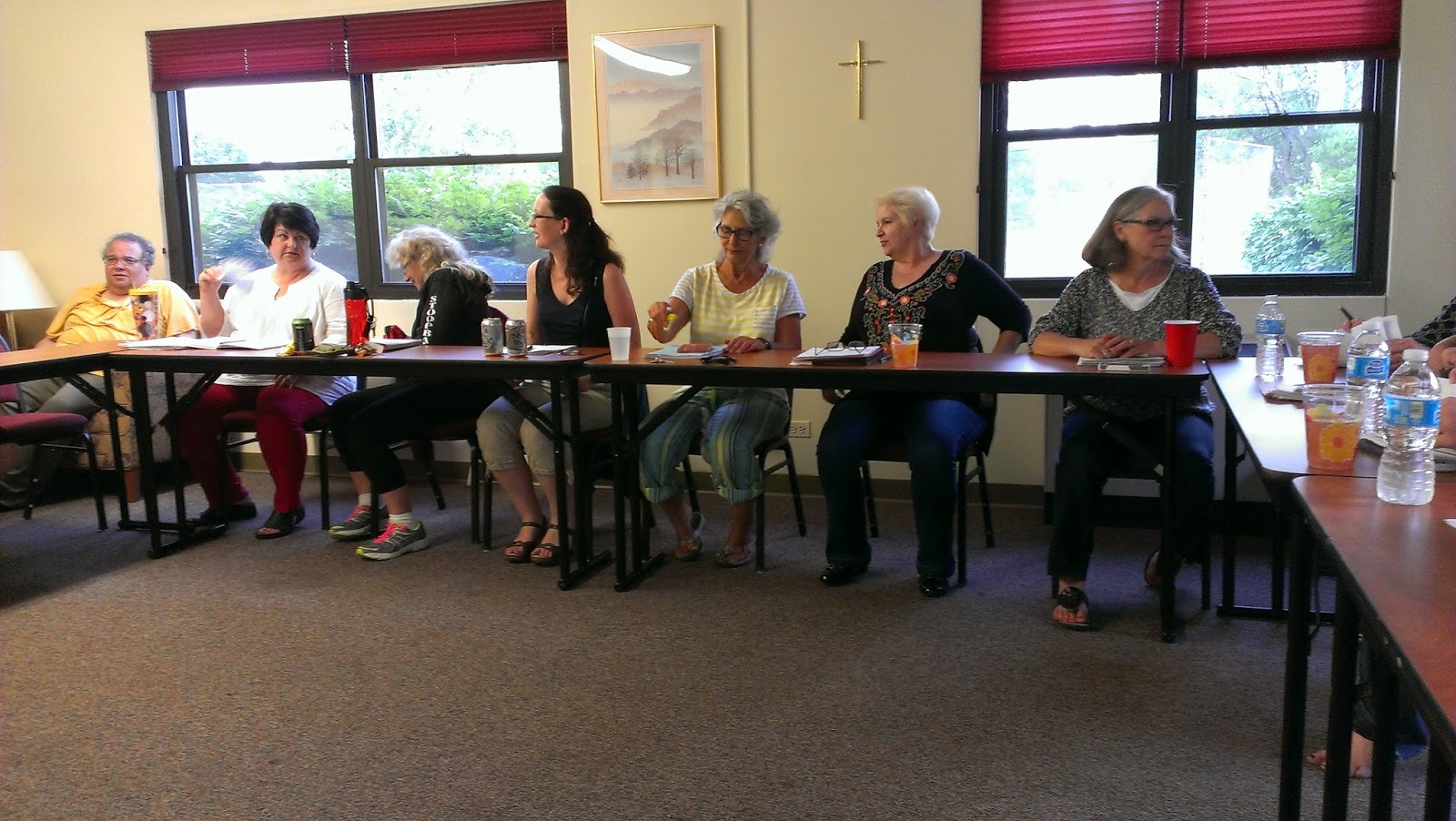 An unexpected highlight was the level of contact I made with some new people, along with reconnecting with those I knew well. There was a woman from Mora, Minnesota who was kind enough to say she'd send me contact information of a local bookstore in Cambridge, Minnesota as well as some possible media contacts. Another woman from Wisconsin enthusiastically gave me the names of two bookstores that feature signings and/or book groups in Spring Green and Richland Center, Wisconsin.

These two people have nothing to gain from helping me, yet they do. Call it "Midwestern Nice" or whatever, but mostly it's just the way the writing community rolls. Help others and they will help you. I was able to talk to a fellow author about my "Square" account and how it works. (One of those card swipers that you plug into your phone during book sales.") She was curious and I wanted to help. We just do those things for others.

Another example was when my writing instructor, Kathie, asked if wanted to be part of a "writing across genres" writers panel at the Southeast WI Festival of Books in September. Of course I said I would. Again, writers helping writers.

The whole weekend I saw it over and over again. While I tended to stay tucked away in my room writing - it's how I roll - I saw people pairing up in the community space talking over ideas, sharing advice and supporting one another. It's like the GIS Conference I go to every year, except for writers. Geeks sharing geeky things. Don't judge. It's amazing.

Between bouts of writing and networking, we did hours and hours of critiquing each others work. When you have 23 writers, your variety of subjects covers the whole spectrum:

Shape shifting wolves, immortal agents, multiple personality therapy patients. There were stories about drinkers, lovers, comatose golfers, radio operators with swimming issues, girls that can fly, and more. There were poems about books posing as lovers and missed connections with a twist. 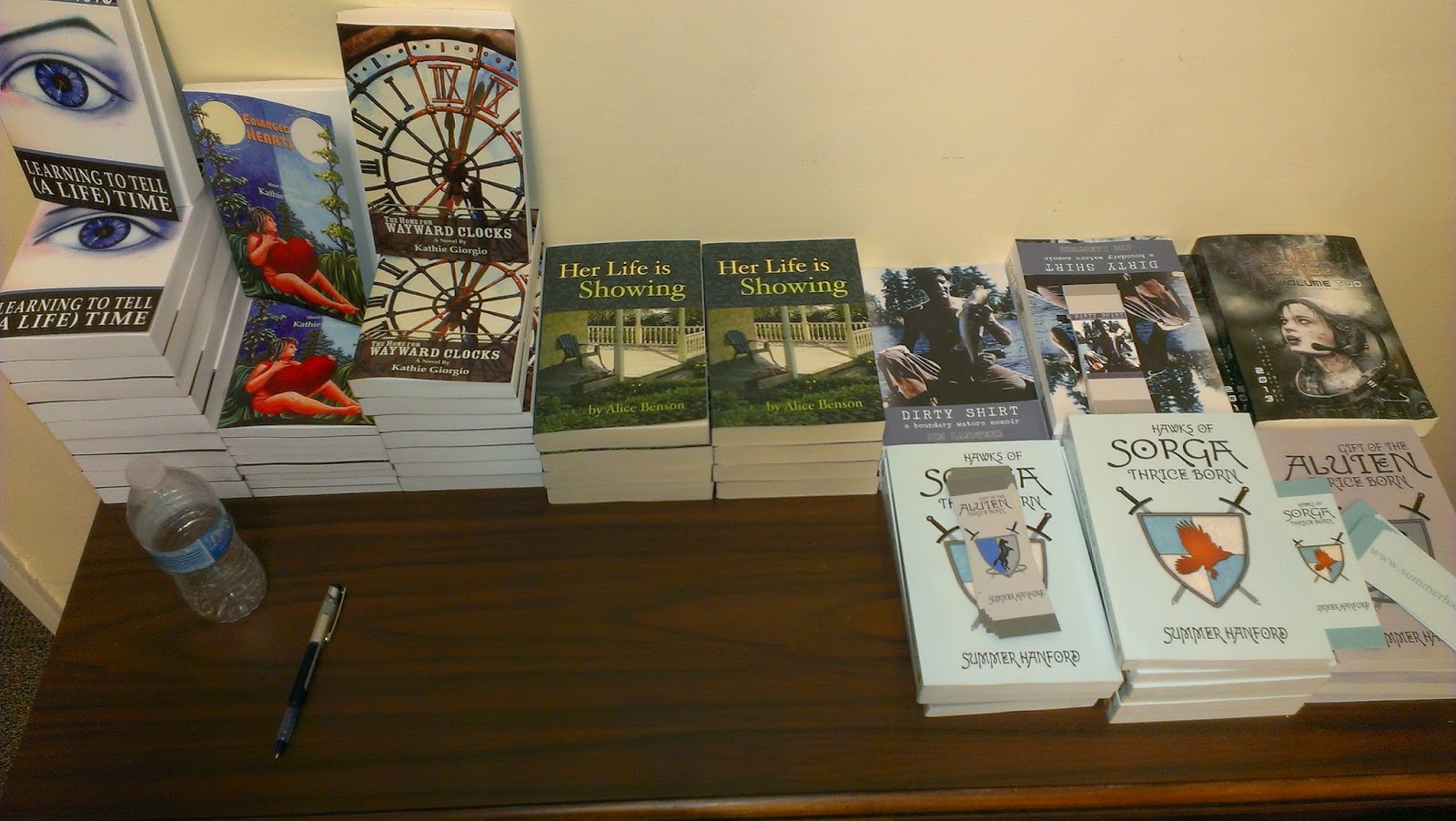 In other words, you see and hear all kinds at this event. And every one of them has a story to tell, including me. My thanks, appreciation and gratitude go out to Kathie and Michael Giorgio for all their work again this year in setting things up. It was fabulous. And best of all...

I'm 24 pages closer to another book.