February 18, 2016
Some blog posts come easier than others.

But in case you didn't notice, it is dark February and, well, sometimes life comes easier than in the middle of winter, too. And make no mistake, I haven't yet posted my "I hate winter" post that typically comes this time of winter.

Well, I aim to fix that, so here goes. 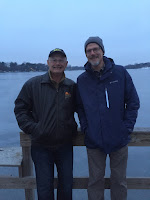 Now, to be fair, we've had a rel atively mild winter. Almost ridiculously so. December was kind of a joke, and we've really only had one significant snowfall and two good(?) cold snaps. So I really have nothing to complain about. But it's what we like to do most in winter, so I did. And never mind that winter seems to be on its 260th day.

All I know is that tomorrow we gain one more minute of glorious sunlight. (Which will no doubt be shrouded in a think blanket of grey blech.)