March 27, 2016
I went to the Art Institute of Chicago on Friday with Donna, Ben and a couple friends of ours. The museum was featuring a special exhibit titled "Van Gogh's Bedrooms." Because it is a limited run, we wanted to get down to see it. Being the start of Spring Break, the stars all aligned, we got tickets and made it happen.

We took the early train down from Kenosha and got to the museum about an hour before it opened. We lucked out that way because the line started forming within 15 minutes of us getting there. We got in early and went straight to the exhibit. There was no waiting, and the crowd wasn't too bad at first, but by the time we left they were in a 90 minute wait to get in.

The exhibit was fascinating. Vincent Van Gogh has such an interesting story and the museum did a great job of documenting some of it. One of the things I learned was that he had three versions of his famous work "The Bedroom." The first was a work done while living in his first real house - aka the Yellow house. When that one sustained water damage, he asked that his brother bring it to him while he was in the insane asylum, so he could copy it - it was that highly regarded. Then, eventually he made a third, smaller copy for his mother.

Each of the three have their differences and nuances that the museum explained quite nicely. They even had a looping video screen where they zoomed into each piece at the identical spot on the other photos and compared them. 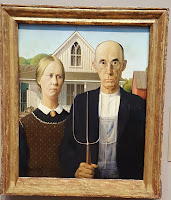 As we walked through the rest of the museum, I thought that I'd really like to have the museum to myself so I could take my time at each piece and read the history of each and spend some a little more time appreciating each one.

It was really nice being able to talk to one another about what we liked and didn't like about not only the Van Gogh's, but all the art. It was proof that art can be enjoyed either alone or with someone else.

I also thought it was interesting to track my emotional response to each piece I stood in front of. Some evoked wonder and awe. Others brought out a feeling of joy or happiness. Several pieces were "dark" and made me wonder what the artist was going through at that period in time. Or, perhaps their stylistic tendency was just dark. In any case, when I emerge from the museum, I'm always a little emotionally spent. It's a bit like being around a bunch of people at a party for a long period of time. I enjoy the moment, but it is a draining experience in the end.

I also am glad that I have raised two kids who appreciate art. Ben was engaged and as fascinated as we were with the masters and the minds behind the masters. In years past when Sarah came along with us, she was the same way. Glued to the canvas, so to speak.

I've been to the museum probably a half a dozen times and I always thoroughly enjoy it. As I look at these paintings, I cannot fathom ever undertaking something like painting a large landscape or portrait. The mind of an artist is a different animal. I have nothing but admiration for my talented artist friends, including Walter Jack Savage, Stacey Ball, Jill Krey, Sara Risley, Mark Neufang, Leah King, and even my own two kids, Sarah and Ben.

I give them credit for the gifts they have that I do not. My paintings would look a little like Koko the Gorilla's if I ever decided to pursue the craft.

Writing is hard enough. I think I'll stick to what I know.