August 18, 2016
I am currently working on a story involving a couple of clowns and a stolen Dodge Charger. Well, actually a couple of stolen Chargers, one vintage, one modern. The story was inspired in part by my obsession with classic Dodge Chargers/Challengers.

I've also just completed a poem about a ride I had in one back in the day. We hit 100 MPH in it, which seems as reckless as it was - though 100 was different back then than it is today with our 70 MPH (and in some cases 80 MPH) speed limits. 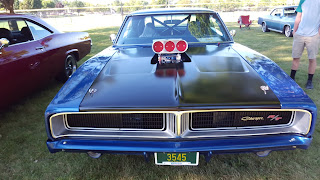 I have loved these cars since I was a kid. Of course, back in those days, they were the muscle cars. The closest I came to ever owning one was the Hot Wheels version.

So when Ben and I go to our annual car show, I tend to focus on finding the Chargers and other muscle cars of the 70's and 80's. If you know them, they are the GTO, the Super Sports, Camaros, Firebirds, Corvettes and the like.

We went again last Sunday to a show in downtown Waukesha. We only had an hour before Ben had to leave, so we did sort of a sprint through. And it was funny because every time I saw a different model of car that I really liked, it spurred a story. I'm sure this probably bored Ben after a while, but if it did, he didn't say anything.

It has become one of our "things" that we try and do together every year. We go, we gawk and we talk about how I should buy one in my retirement and take it around the country and try and win prizes at various shows. He even says that he'd like to restore on one day. I tell him his Uncle Steve used to restore cars. He always joked about how he'd have to "save up" his spending money to by an alternator or bumper or blinker stick. 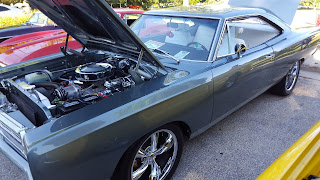 When we got home he jokes that one day 30 years from now we'll joke about seeing a Hyundai Santa Fe in mint condition and go "I remember when we had one of those!"

Well, that might be a stretch. But we will likely look back at this period of history as that "time everyone had to have an SUV."

And so, until that day in retirement when I take the plunge and do something as blindly foolish as buying a 50 year old car, I guess I'll have to continue to go to car shows and dream. 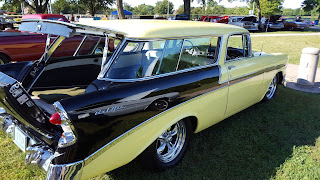