December 18, 2016
December is a month full of significant birthdays for me. My brother Paul's is December 2nd, my wife's is December 7th, my own is December 11th and my stepfather, Jack's is today, December 18th. He would have been 87.

Jack dated my mom  for nearly 10 years before they married in 1979. They divorced in 1985 and we sometimes joke about how getting married was the biggest mistake they made. When they didn't get along during the dating years, they just stopped seeing each other for a couple of weeks. Then, they'd get back together and all would be good again until the next time. 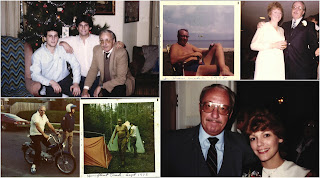 While I can't paint Jack as a saint - he had drinking problems for most of his adult years, the cause of both his divorces and the source of much hurt to his families - I think it's only fair to point out the good on his birthday.

Jack had a wicked sense of humor. He loved to laugh and was great at getting others to laugh with him. That's why people liked him. I know there were several occasions that Mom pulled him along to something he maybe didn't want to go to because she knew people "loved Jack." His sense of humor and wit were part of the reason he earned the moniker "Happy Jack," or just "Happy." He was also a smoker and as bad as that habit is for you, there is nothing quite as funny as a good "smoker laugh." It comes from the chest and fills a room. The good ones usually end up causing a coughing fit by the laughter afterward.

Jack loved kids. He had 8 by his first marriage and married into our family of 6 kids. He frequently mixed the families by taking us out to the beach. He spent much of the time either horsing around with us in the water (including his famous "butt bouncer" dive off the diving board or throwing the football to Timmy, Maggie and Theresa (his twin girls) and me. He and Mom took us camping and made sure that we had fun when we were there. I remember one year we went camping and we went to town to get something, not realizing we had the bug spray in our car. When we got back to the campsite, he joked that he'd been spraying Raid bug fogger on himself.

Jack had all the sayings. He was the king of a bunch of sayings, some of which got more prevalent when he'd had a few drinks. A few of his lines were:

His nickname for his girls was "Toots" (less than flattering, ha!) and his go to phrase whenever he and Mom were arguing was that he'd go and "Sleep in my one-third of the house down at 965." (His family lived on the same street as we did, two blocks away.)

I realized coming into a family as any stepfather must have been a tough thing to do. I was lucky, Jack always liked me - for whatever reason. He taught me a love for football and the Vikings. He SHOWED UP when my grade school football team went to the City and then Twin City Championship games. It totally caught me off guard, but meant the world to me.

The last time I saw Jack was on Easter Sunday in the late 90's. Jack was in a nursing home for a rare disease that was eventually the end of him. I told mom that I thought it was more important to go see him than to go to church. We went and I introduced him to our daughter Sarah who was just a baby. He was in rough shape, but he still had his wicked sense of humor. Mom scolded him for being a slob and picked up his room a bit, but he just made light of it and we all had a laugh. For some reason I felt I needed him to meet my daughter. I don't know if he remembered it a week later, but it's a day I will never forget.

Because when you love someone, despite their imperfections and their flaws, warts, tics, bad habits and all of the hurt  they might have caused, at the end of the line when life is coming to a close, I like to focus on the beauty that that person brought to the world. Some prefer to dwell on the bad - and there's maybe space for that - but it's not my style. 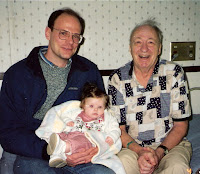 People in your life shape you and make you who you are. You take their influence and try and make it better in your own sphere of influence. That to me is what relationships and love and family is all about.