May 21, 2017
With Ben's high school graduation coming in a little less than three weeks, we have been catching up on many badly-needed house projects, both indoors and out. There's nothing quite like having 50 people come to your house to get you to take a look around and see what needs work. As a result, we both have mental lists in our heads and whittle away at projects as we can. 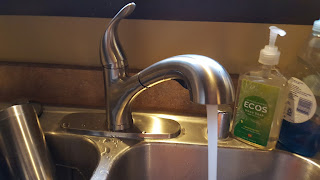 Unknown said…
He fixed the problem for a very reasonable price, clearly explained the issue, offered advice for a permanent fix, and was entirely pleasant throughout. Highly recommend all night plumbers!http://allnightplumbers.com
October 26, 2017 at 4:14 AM

Karolin Pfeiffer said…
When using restrooms in public places like airports, many people are concerned about the spread of germs when they have to touch items like towel and soap dispensers. plumber
December 22, 2017 at 5:56 AM

Positive site, where did u come up with the information on this posting? I'm pleased I discovered it though, ill be checking back soon to find out what additional posts you include.

Ellen Sammy said…
I came across Groff Plumbing online to try and look for a local plumber to repair it. Groff Plumbing
April 23, 2018 at 4:53 AM

James harper said…
Excellent article plus its information and I positively bookmark to this site because here Click Here I always get an amazing knowledge as I expect. Thanks for this to share with us
May 25, 2018 at 7:07 PM

Unknown said…
The complex art of plumbing necessitates expert and professional hands if done correctly. From aligning the plumbing patterns to the Government guidelines to making room for improvisations, professional consultations is a must before indulging in any sort of plumbing activities Emergency plumber Hollywood Florida
May 30, 2018 at 5:13 AM

Robert said…
Great post I would like to thank you for the efforts you have made in writing this interesting and knowledgeable article. go to this website
July 4, 2018 at 4:17 AM

Unknown said…
You will often find a more specific 2-year program in "plumbing design" at a number of colleges. Plombier Ste-Foy Québec
September 8, 2018 at 3:52 AM

lizza kim said…
Haha wow, I love this man. PLEASE keep posting! Can't wait to read your next blog.This is a pretty great post. I've been thinking of starting a blog on this subject myself. Any tips or anything you would recommend me to avoid.
November 15, 2018 at 3:32 AM

gunardi said…
You managed to hit the nail upon the top and also defined out the whole thing without having side effect , people could take a signal. Will likely be back to get more. Thanks
Tangki Panel

Eliza Beth said…
Thanks for taking the time to discuss this, I feel strongly about it and love learning more on this topic. poker online indonesia
April 21, 2019 at 11:51 PM

Unknown said…
I certainly appreciate your stuff provided in the blogs.
disposethegarbage.com