July 01, 2018
If there's one thing I hate more than moving, it's moving someone else. But I've moved enough to know that you can't do one without expecting a little of the other. You help because you are helped. There will come a day when we move we will be grateful for those that help us move, much like the folks we help move are grateful for us.

I would go as far as to say no one likes moving. So maybe we can help each other hate something for a shorter time. It makes me think of a quote from Michael Perry that I saw earlier this week that reads:

"There is the idea among psychologists that gratitude can be cultivated. Put it out there and it comes back to you." - Michael Perry 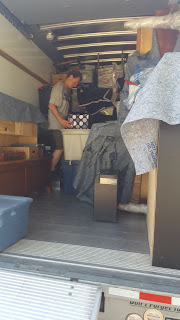 I think the same goes for a bit of selflessness now and again. Selflessness cultivates selflessness. I have a friend who helped with a move this past week that is probably the most selfless guy I've ever met. It's a quality I both love and hate. I love it because it reminds me what Jesus was like - or his recommended Modus Operandi. I hate it because I like my selfishness at times. I want to be selfless when it's convenient, on my terms, when my schedule allows.

But watching this guy give and continue to give pushes me to do the same. (Or, if not, to feel guilty for my selfishness again. It's a cycle.)

Anyway, we worked alongside one another for nearly eight hours moving some friends. It was without a doubt the hardest move I've ever done, but I realized the family moving had no other help, so was determined to finish the job. We did it and there was gratitude waiting for me at the end.

Every time I move someone, I am reminded of a few of the bad moves I've made before. If you've helped people move, you know what I'm talking about.

During one move years ago we were literally pulling clothes out of closets and dressers and throwing them in boxes. It was like the person was surprised to see us show up to help them. Either that or the thought that "moving help" meant literally starting with the first box. 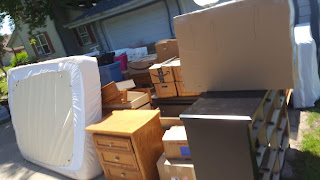 It was that move when my wife and I agreed that if you are getting people to help you do a project, be it building a fence, painting or moving, you need to make sure things are ready to rock when they get there. Anything else is just an abuse of their time.

The move this weekend was well packed and ready to go. There was just a ton of stuff. They are a big young family, so it made sense.

Regardless of how much stuff any move has, they are always reminders to me that I need to minimize - especially before a move, but day to day as well. It is my goal not to burden my kids with a garage/basement/attic/storage shed full of crap when I die. How much stuff does an old couple need anyway? Downsize as you go. My mom has done a phenomenal job of that and I plan to do the same.

And my kids will be grateful for that.

Unknown said…
Keep the balls rolling!! Nice posts you have given for us.cheap removalists
February 6, 2019 at 9:04 PM