Rage: Blinded By The Light

September 09, 2018
Try as I might to be upbeat and positive, yesterday was not my best day ever.

I had the greatest of intentions to get a lot done, but every time I started something it was thwarted.

It started with my usual routine of going to the Public Library and trying to write and catch up with some other tasks. Well, the WiFi wasn't working - at least on my computer, or my phone - so after struggling with it for 10 minutes I packed up my laptop and headed home. Argh! My time would be better spent on chores and errands, I figured.

I had a piece of art I wanted framed, so I went to Target. Of course the size was odd and there were no frames to be found. Argh!

I know, I'll by local and help a local merchant out. So I drove to the  shop in downtown Waukesha.  Upon arriving, I found a sign on the door saying, "I'm up the street changing out some art, call me at 555-1234." Well, being in a hurry, I thought I'd check back after going to Home Despot (sic) to rent a carpet cleaner.

So I go to Home Despot to rent a carpet shampooer to do a few rooms in my house. When I get it home and start it up, it appeared to be leaking a little out the back. Thinking it was just a minor leak, I continued on. As it went, the leak seemed to get worse. I was determined to finish though, so toughed it out and finished in about 3 hours. When I went to clean it up, I found a hose that was fully unhooked behind the receiving container. Argh!

When I took it back, I let the clerk know that the thing was a source of great angst. He was nice enough to refund me 1/2 the cost of the rental, which frankly I thought was a bit cheap. I thanked him anyway and left.

I went back to the frame shop thinking the owner must be done by now. Instead, I see a sign that says "We're closed. Please try back again," despite allegedly being open until 6:00. Argh! There were a few choice words muttered under my breath at the sight of this sign, and they might have even been harsher than Argh. Needless to say I won't try back at that store again and I encourage no one else to. Ever. 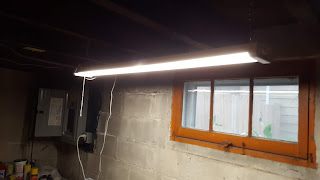 At this point in my day of frustration I'm seeing a trend, so I thought I needed a win.

So I took on a project involving hanging a new LED work light above my workbench to replace the fluorescent light that had gone bad. After removing the old light I literally had the new light up and working in 15 minutes.

My work here is done.

It was the only thing that went right all day, so I basked in the glow of those LED tubes and might even have said a prayer of thanks for something actually going right.

Some days are like that. If you need me, I'll be in the basement.

Unknown said…
Batteries plus will recycle those florescent tubes for you at a very low cost. Just check their hours before you go. lol