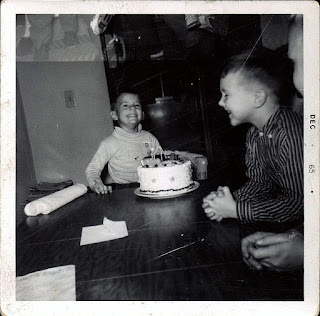 And I am fairly healthy too. Sure I have some chronic things, like numbness in both my feet caused by a back injury at 40. But I suspect most people do, and considering some of the issues of this age, well, a little numb foot ain't so bad.

I say it's a non-event because, except on the decades and to a lesser extent, the fivers, birthdays are just another day. As I get older I have a harder time thinking of something I don't have that I would like for a gift, so it's low key from that perspective. My wife's birthday is on December 7th so we usually agree to not get each other gifts.

Instead, we've made it a tradition to go out to dinner with a couple of friends, whose birthdays are near ours. We used to go to the same restaurant every year, but that got old, so now we switch it up.
Last night we went to a classic Milwaukee establishment called Thistle and Shamrock. The establishment was rated one of the top 10 places for fish fry in Milwaukee, so we thought we'd check it out. It was a delicious fish dinner with great service and even live R&B music in the bar area. The owner even gave us each a bottle of wine. He said it was what he did every year to recognize his customers in lieu of having a full-on Christmas part. The place was old-time Milwaukee cool and was everything we'd hoped. It made for a really great meal.

So, it may be tell-tale when you start looking at birthday experiences like this as a bigger deal than cake and gifts. It's probably a sign that you're old, but frankly I don't much care. We talked and laughed our heads for a few hours together. It was one of those nights that made me realize how rich our lives are and how lucky we are to be able to enjoy a good meal in December with longtime friends. 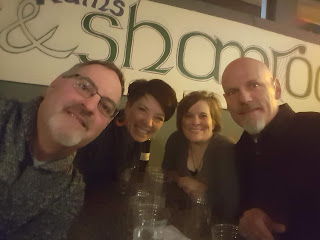 Today another old friend of mine sent a quote from GK Chesteron that kind of sums things up.

“Here ends another day, during which I have had eyes, ears, hands and the great world around me. Tomorrow begins another day. Why am I allowed two?” - GK Chesterton.