Oneness, Meditation And The Zen Of Paper Straightening

January 10, 2019
In the past I've mentioned that I have a group of guys I have coffee with at Cafe De Arts for one hour every Thursday. I once jokingly called them the Thursday Theologians because often times our talk is religious or spiritual in nature, though not always.

They're a hard group to summarize, really.

I would call them my "best-friends-for-an-hour-each-week" but that would be sappy and besides the name is too long.

They are friends though. Most of them are part of my church CollectiveMKE, but not all. It certainly isn't a requirement, though as I said, our conversation often drifts into spiritual discussions.

We usually pretend to be sort of a book study, though we're all slow readers and take forever to get through a book. The book is more of a reason to show up than anything we really delve deep into. If we didn't purport to have anything "in progress" there might be impetus for someone not to show. We need an anchor, so a book it is.

Our discussion is willy-nilly and meanders on random tangents and rabbit holes. Today was a good example when we started down the path of meditation. It led to a sidetrack of "paper straightening" and how a certain level of that is healthy, or even meditative, but if you do it too much, it becomes an unhealthy OCD thing. It is these sorts of extrapolations that make the conversations interesting.

Then I asked if anyone in the group had ever meditated. It met with a lot of head shaking. Some guys offered alternatives that they would consider meditative. Methods I'd never thought of that cleared their minds, which is part of what meditation is, I suspect.

Later, one of the guys today asked "How do you know if God is speaking to you?"

It was the source of some deep discussion. Everything from people not hearing God to those hearing him in nature, to those experiencing him when they're in their friend group. But we also concluded that we can't really refute someone when they say "God told me," because, well, how do we know he didn't? It is really a personal thing, if it's a thing at all. We also agree that people may even be using the "God told me," line to justify something they don't feel comfortable about. Maybe, maybe not. 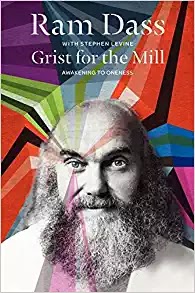 We are currently reading a book by Ram Dass, titled Grist for the Mill. It is about experiencing oneness. Dass was kicked out of Harvard in part for hanging out with Timothy Leary and, well we all know what he was famous for.

In any case the book is one we're just getting into. We're all looking to expand our worldview in hopes of increasing our faith, and this book is an extension of that exploration. In the past, if we don't like a book, we sort of agree to move on. Maybe this book will do that to us, I don't know. So far, I like what I've read.

Anyway, I digress. What I started out this post wanting to say is how fortunate I am to have this hour every Thursday to talk about everything from automotive maintenance, to engineering feats, to political postulating to paper straightening.

We are literally all over the map.

We're not a Bible study, but the Bible comes up almost every week in some capacity.

We're not a book study, but we touch on the book almost every week.

In fact, I'm not sure what we are. I do know that each week I come away asking a new question or in some way challenged or enlightened. (No, not like Timothy Leary enlightened. Just drug-free  enlightened.) I also know that I look forward to my Thursdays more than any other day during the week (except Fridays, of course.)

It is my one hour, caffeine fueled, mind-bending, deep dive. It's cool!