Living Out The Ninth Life

July 28, 2019
So our house got just a little quieter yesterday. We were forced to put down our nearly fifteen year-old cat, Chester. Chet, as he was affectionately nicknamed by my father in-law, had been losing weight for the past six months and we all knew the end was coming. When he lost function of his back legs yesterday, we figured this was it. We've had other cats and knew that the typical lifespan is about 15 years. (He would have turned 15 tomorrow.) So none of this was a surprise. 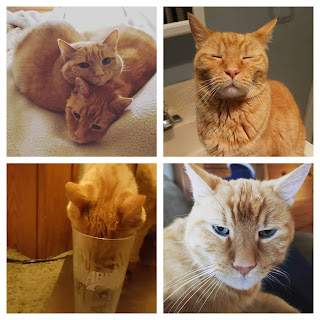 That it wasn't a surprise doesn't make it any easier when the time comes.

We took him to the Vet and were present when he was peacefully laid down. It was sad and painful, yes, but being there when he died was a form of closure for us too.

That's not to say that the rest of yesterday wasn't hard, as I suspect the next few days will be. Death of anything close to me always hits like a gut punch. This was no different. Last night I was walking the dog and dragging my own corpse around the neighborhood feeling the weight of death in all its heaviness. Everything takes effort. Death saps a person.

And even though this was just a cat, it dredged up feelings I'd not had since the loss of my brother in 2011. Death re-reads stories you'd finished and hated. That bottomless pit feeling of loss is soul crushing and you don't realize how a small fur-covered animal can stir up memories of people and other past pet deaths.

At the same time, Chester had a good life, a good run, if you will. He was a polydactyl cat with one extra toe that made him look like he had little baseball mitts on his paws. We think that was the reason he was one of the last of his siblings left when we adopted him.

Like every pet, he had his quirks and rituals. He loved to lay in the bathroom sink when it got over 80 degrees outside. It was probably the cool marble that attracted him. He also waited outside the bathroom every day for when I finished showering. Then he'd slink into the bathtub and lick up the water. He was a fresh(?) water junkie and liked it anywhere outside of his very available water bowl. 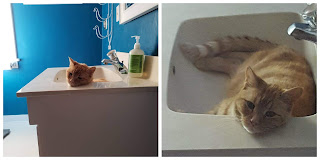 He loved his sister Isabelle, and the two often slept curled around each other sometimes forming a cat heart. His latest trick was to sit in one of the two kids' chairs at the dinner table and watch us eat. Once in a great while we'd feed him a bit of meat from our plates and he'd chew it and wait for more. We'd become the weird cat owners, but we knew his time was not long, so babied him a bit.

As with any cat, he came at a price. There was the endless vacuum containers full of hair, the countless cat yaks found everywhere around the house and, more recently, the naughty boy pissing around the house. We hated that more than anything.

So with the passing of him and eventually his sister Izzy and probably his brother Toby the dog, in the next few years, our house will grow quieter and more lifeless. My wife always said that cats - love them or hate them - do bring a life to a house that would not be there. She is right about that.

And Chester, with his big paws and his sweet face will be missed greatly.

Ellyn Lem said…
Beautiful tribute to your one and only Chester. I can only imagine what a happy life he had at Chez Landwehr. Hoping your heavy heart feels less weighted down in time and the memories of your feline buddy last your whole lifetime. Will be thinking of your whole family during this time of loss.
July 28, 2019 at 12:31 PM