I'd like to believe we're on the downside of winter, but I'm afraid to for fear of more snow. It has been a brutal last 6 weeks after a fairly mild, almost snowless December. 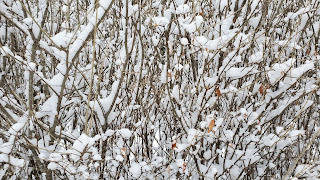 There were some things to appreciate about this season, starting with that snowless December. January had a lot of days near 30 degrees which made for good cross country skiing and decent walking weather to maintain some semblance of fitness. Then Late January and early February rolled around and as often happens, things got ugly. Lots of significant snowfalls, usually followed by the predictable cold temps that seem to follow most storms.

Throw into that fun, the last 10 days of what I'm calling a Polar Vortex, (I don't know if the meteorologists are, but I am)  and it has most of us thinking spring can't come soon enough. Temps are creeping into the thirties in the next few days so, I'm running with that victory.

After my walk in 17 degree weather (and daylight, bonus!) yesterday, I proclaimed to my wife that I think we're going to make it. We will probably survive another winter. Every November, I dread what is before me and every mid-February, my hope is restored.

The only saving grace about the bitter cold we had these past 10 days is that it probably kept people at home where they should be, thanks to the pandemic. I've managed to stay fairly positive despite the dark and cold of winter. Walking, yoga and early bedtimes have made it all more bearable. That and a binge of a few Netflix series.

I've come to a time where I am convinced that in the midst of a midwest winter, you do what you gotta do.