As I mentioned last week, my son, Ben graduated from UW - Madison this past weekend. We were fortunate enough to be able to watch it via a YouTube stream, which was the best we can do in these strange times. I've said it too many times, how proud I am of him. He finished in 3 1/2 years having had many of his AP credits transfer.

With both of my kids, I've kept a journal of major events and milestones in their lives, from birth until they graduate from college. These entries can go from back-to-back entries all the way to not writing anything for 6 months. I wrote as I felt inspired or led. I gave Sarah hers in 2018 when she finished school at the University of Minnesota. She was emotional when she opened it, knowing exactly what it was, but not expecting it. Read about that, here.

Well, this weekend was the chance to give Ben his. We had a small outside gathering of friends at a local brewery here to celebrate. When I gave him the gift he had no idea what it was. He opened a few pages and read a bit and said it was awesome. He got up and gave me a hug.

Now these books will never be published, but I have long said they are the most important books I've ever written. Best-sellers of one copy, in my opinion. They are a chance to show the kids what was going through their father's mind all those years they were growing up. There are moments taken from big vacations, moments from sporting events we attended, and moments from key events - birthdays, proms, etc. 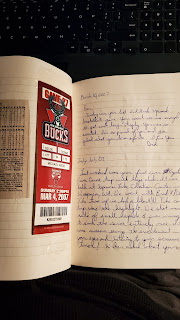 The book is unedited, all in my scrawly longhand and probably an editorial mess. It is a stream of consciousness and some are better than others. For instance, I read a few from long ago and realized I was really into the religious-speak back then. I guess it shows where I was at that point in my life, when slinging the Christian lingo seemed to be the right thing to do.

But that is the nature of writing. Any writer who goes back and reads their early stuff always cringes a bit. I guess I need to get over it. No harm, no foul.

If I had the chance to do this again, I'd do it in a heartbeat. I may end up with a similar journal with grandkids someday. I don't know. But if I don't, I've still got my two best books in the hands of those that matter.