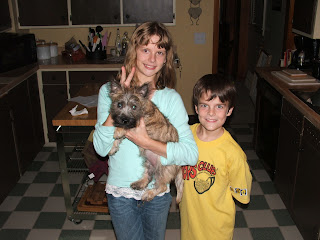 Are we there yet? As expected, this was likely the longest day of the week. With School, Soccer, and Boys Club and Nexus, it just keeps on going. If I didn't know that Donna was having a long day as well, I'd complain. (I am anyways ;-)

Lesson #1 learned today: Making lunches ahead of time is only "organizational" if you then pack the lunch in the backpack at Go time. Yes, I got the call from Sarah, luckily before I headed to work, so made the dropoff w/little interruption.

So in my trivialities of the day, I begin to think about what might be happening in Guatemala. I think about the good that is being done and that has been done by the many who have served before.

It makes me think of Donald Miller, author of "Blue like Jazz" and how he said that he once had dreams of owning a Volvo. When he started to think about the story or movie of a man whose goal it was to own a Volvo he thought it made a pretty boring story. He then challenged himself and us to make a better story, and that's what these women on the trip are doing for themselves.

It makes me think of my 72 year old mother (at the time) feeling moved to answer phone calls in Washington, DC t0 the Katrina victims for the Red Cross. What moves people to these things. It is God's inherent goodness within us being put before ourselves. Something that many people never think twice about. What are we here for? To learn, get married, have kids, work 40 years and retire? Or is there something more? I think we all know there is.

It makes me think of Michael, my ex-little brother in the Big Brothers program whose house always seemed messy. Lord forgive me for judging that poor single mother's housekeeping skills. My house looks like hoboes are living in it after only 4 days of no 2nd parent.

Sorry for the pontification...it's just what's swirling around today.

The rest of the day was pretty much a blur. Walk the dog, scoop the poop, praise the potty outside, work a little, speed home to lunch, more dog excretia, back to work, make some cool maps, speed back home, off to soccer, much unrest among a parent (not me) concerned about the coaches attitude, speed off to boys club.

Boys club was good with the usual mayhem thrown in for good measure. We had balloon races, so I was blowing up balloons until my cheeks were numb. Then, off to gym where the balloon relays took place. No head traumas this week...a good thing...Praise God for small victories. Then off to story circle with worship time and the usual bad powerpoint lyric management. (How hard can it be to hit the down arrow when you come to the end of a lyric? Yet every week it's the same story. Much muttering and mumbling among the boys when the words don't match what's being sung up front. Its a good thing God will take our worship no matter how mixed up it is. Thank goodness God can sort it all out and make sense of it.)

So we finished up with Dairy Queen and a kid meltdown when Sarah allegedly popped Ben's last balloon at home. Ahhh, now that's livin'!