Death of a Friend 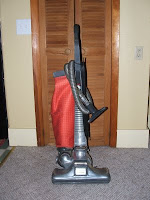 I think the relationship has come to an end. The beast is dying. It even smells of death. The Kirby Heritage Classic is on life support. The motor revs up and down like it's getting power surges all the time now. The headlight works all the time know, to the point where my kids were asking when we put a light on the vacuum. I think it's just kind of a last gasp for the old girl before she shuts out her light for good.

It is a mixed blessing for me. Technology wise, it's a bit like pushing a Harley Davidson around the room when the rest of the world is using mopeds. I know "nothing cleans like a Kirby" and all that, but you know what? I'm willing to try.

We went out and got a new Eureka today and I feel like a man who's having an affair or something. After years of dutiful, beautiful service, I'm dumping the beast like so much baggage. Heartless *!&%. When I think of the pounds of cat and dog hair she's suffered through, and the stray shoelaces and subsequent shoes she's sucked up, it brings a tear to my eyes.

"But you've gained so much weight, it seems", I say. I'm leaving you for a better model. Trading up so to speak. Not that I didn't once love you, but rather that I've lost that loving feeling.

So, it's off to the Kirby shop downtown to see if they will give me $10 to part her out. Who knows maybe they'll refurbish and sell her for $100. I half contemplated getting her fixed, but part of me just wants to move on. I'm tired of pushing that anvil on wheels around. My back and wrists have had it. She'll make some younger fool much happier than this old dog.

Ben and I had a great day today. Went to Sonic for lunch. Note to self: NEVER ORDER THE CHILI DOG AT SONIC AGAIN! What a mess. There was chili and mustard on everything. Not pretty at all. Also, do you tip at those places? The car hops seem to be working so hard, that I felt they were worthy of tipping, but wasn't really sure of the ettiquette, so didn't bother.

After that we went to the Lakefront and, on a whim, rented 2 "skelters" which are 4 wheeled bikes that were a blast. Then we threw the football around in the gale force wind that was today's weather. After that we drove around the East Side of Milwaukee and then headed back toward home. We stopped at Dunhams to "boy shop" which is another word for drooling over many items, but buying none.

On to Gander Mountain where we looked at everything from Turkey Huts, fishing stuff, to shotguns. Again, more drooling, but no purchases, other than a license.

Finally we finished out the day at the Joke Shop where Ben got "Cups and Balls" a highly disappointing magic trick that only frustrated the poor boy. Practice man, Practice.

The greatest part of today though was just talking and laughing with him. I told him some of my Boundary Waters stories that wowed him. We just talked about whatever. The history of Lynyrd Skynyrd, goofy friends of his from school, lines from movies we've seen, fears and longings, dreams and goals. I never get the chance to talk one-on-one with him without an editorial comment from Sarah, so it was good in that way.