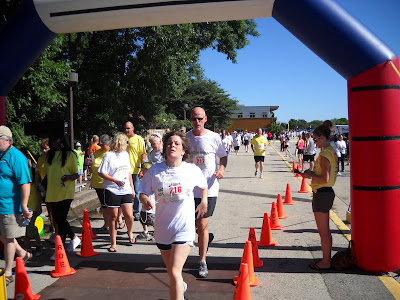 I want to remain positive about it because we don't know much at this point. All I can do at this time is wait and pray, so that's what I'm doing. That's what my wife and kids and friends are doing. My friend Steve is going through a similar situation with his brother, who has pancreatic cancer at 42. Then my Mom tells me tonight that my sister is going in for a biopsy this week too. (Those of you who know me know I lost a sister at age 5 to a Wilmes tumor). Then, there's my Mom's issue and I found out this week my step-father's ex wife has a rare form of cancer too. It seems to be a trying time for the whole family. Cancer of any sort is an ugly disease and this run and the situations in my family of recent has raised my awareness to just how awful it can be.

The plan is to possibly run in one or two more in the fall. Our friend Patty has said she wants to run in a run for the Oconomowoc Police in Oct. We'll see how it goes for all of us. I am taking the summer off from running because it gets so beastly hot.

More interestingly, is my plan for next summer when I plan to train and run/bike in a Duathlon. A friend has run in one this spring and it was intriguing enough that I think I'd like to give it a try. I'd do a Triathlon, but would either;

1. Drown in the first 100 yards
2. Die along the way
3. Not finish until 2 days later, which is always embarrassing.

Now a duathlon, Run 3.0, Bike 10, Run 2.0 is more along the lines of something I could do. So I'm giving it some serious thought. We'll see how the fall runs go and I'll talk more to some who've done duals and see what I'm up against.

It was a great fathers day today. I am lucky to be blessed with two great kids and a wonderful woman! I got a Gander Mountain Gift Card which should come in handy with Canada being only 8 days away.

As usual when I leave writing to the last thing of the day, I am too exhausted to make much more than a menial post. So alas, I'm blogging off...