The Price Of Freedom 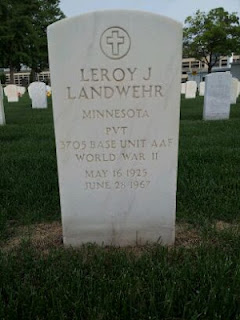 Memorial Day is always one to make me stop and ponder all the veterans that have willingly served and put their lives on the line for our great country over the past 225+ years. Today we watched the parade honoring them as it marched down Main Street in Waukesha. It was a short, but honoring parade, with the requisite color guards, marching bands and military vehicles. People clapped and waved to those that have earned it. The whole event made me reflect on the role the military has played in my own family. Note that none of them was killed in action, but all enlisted and served.

My grandfather Oscar W. Swanson served in WWI in the Army. I'm not sure of how much action he saw, but I think he was largely involved in building air bases as part of it. I should know this, but don't.

My father enlisted in the Air Force during WWII. Because of health issues he was honorably discharged early in his duty. It always bothered him that his twin brother was able to serve and he wasn't. His twin brother Tom was a navigator in the Air Force and has told a few stories of his having to ditch their plane on a couple of occasions during WWII. Fascinating stuff of real heroes.

Not to exclude women, my Aunt Marriette served as a nurse during WWII. I don't know many specifics about where and when but I think she served in the South Pacific. Again, I should know this.

Again, a willing servant to our country in a different capacity.

My uncle Dan reached the rank of Sargent First Class during the Korean war. I wish he was around so I was able to ask him to tell some of his old stories. That kind of history fascinates me.

I'm not sure about the rest of my uncles. I think my uncle Bill on my mom's side served in some capacity.

None of my generation has served in the the armed forces. We were lucky in that we've never seen a war as big as WWI or WWII, so have not had to enroll out of a sense of duty. Tom and I both registered for the draft, Tom for Vietnam, and me for whatever skirmish they felt needed a draft for. Fortunately, Tom's name never came up and there was never a significant war to reinstate the draft after I had registered. Nonetheless, we were both willing to do whatever was asked of us.

Both of us attended a Christian Military (paradox?) High School - Cretin, so we were both adept at knowing the specifications of an M16; that it was a gas-operated, air cooled, shoulder fired, semi-automatic weapon with a maximum effective range of 550 meters. The fact that I still remember that is a bit scary, actually.

We had military class everyday, and the option of taking Marksmanship classes. Tom was always an expert with a gun (still is). He won more medals than I could count. I, on the other hand, couldn't hit the broad side of a barn (still can't). I remember Sargent Stephens looking at my target when I was done and asking if I shot with my eyes closed. Never liked guns much.

My nephew Nick is an active serviceman for the Air Force Reserves. He just returned safely from a tour in Qatar and Afghanistan. His stint in the service has given him a new sense of purpose. Like the generations before him, he deserves accolades and recognition.

And so, to all the veterans and future veterans out there, I want to say Thank You for your service to our country. Thank you for your selflessness, your discipline and dedication. Thank you for overlooking the sometimes questionable decisions by our government to intercede when you don't necessarily agree, and just serving for serving sake. You are my personal heroes. Thank You, God Bless You and God Bless America.