The Story Behind The Stories 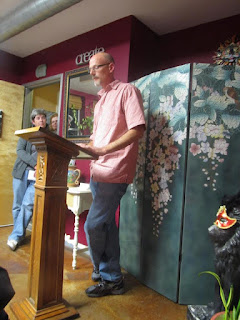 I went to another writing event last Friday night. It's an event called the Friday Night Free For All and it takes place at the AllWriters' writing studio in downtown Waukesha. It features readings from four genres including poetry, memoir, fiction and novel excerpt. Usually a guest speaker is also featured, but this particular event used a panel of students who submitted their work to the Ampersand Review. These poems were supposed to be "Found Poems" which are poems compiled of other snippets. These could be literature quotes, movie titles, or in this case, email subject lines.

I realize that these events are not for everyone. You have to appreciate books, stories and storytelling. It also helps to be familiar with the writing process, though that's not requirement. Many of my friends would not be caught dead at something like this, and I really don't hold that against them. As I said, it's not for everyone.

The fact of the matter is that I really do enjoy them. I enjoy the diversity of the writing styles as well as the shift between genres. I like the fact that poets sometimes just do poetry and nothing else. Or that nonfiction folks sometimes just write nonfiction. But most of all, I think I just enjoy the escape of the stories and the poetry. Like a movie in the theater, it takes me away from this current world and to another place.

To me though, this method is even better than movies or, maybe more rewarding is a better way to put it. The reason is, the listener is forced to make it all up; to see it in his or her head. I'm guessing this taxes different parts of the brain than the direct visual stimuli, of a movie. We draw our own two story house, picture our own serial killer, or paint that far away fantasy world in our own heads. The funny thing is, it is almost always better than what we would find if it were also shown in a visual medium. The old saying that "The book was way better than the movie," is proof of this.

This ability to not only read a story, but tell one without reading it, is another gift altogether. One of the writers in our group competed in a showing of the Moth in Chicago. It is typically an open event where people have 5 minutes to tell a story and they are scored based on how they did. She won first place and came in second place in the next round. She told an expanded version of her story at the Free For All and it was captivating. Some people have a real knack for storytelling. (Of course there are others who think they do and are usually the bores you swing a wide swath around at parties.) ;-)

In any case there is a version of the Moth coming on Nov. 1st to the Miramar Theater in Milwaukee. I plan on attending and if you're looking to do something wildly different than seeing a movie or going out to dinner, I encourage you to do the same.
AllWriters Friday Night Free For All Miramar Theater Moth Storytelling