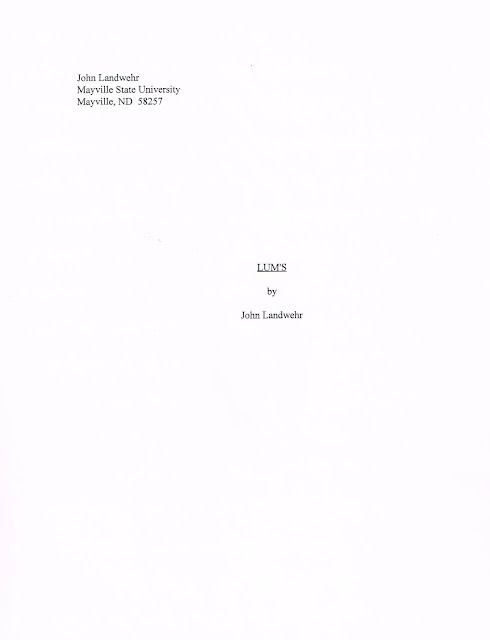 I am about halfway through my deceased uncle's (Jack) second manuscript. Recall from an earlier post that I was given both of his books by my brother to read at my leisure. It turns out that he had acquired them from Jack directly in an attempt to get some publishing interest. My brother has had a couple of books published and so Jack figured Tom might be able to help him out. From what I understand, Tom tried to market them to a few places, but none bit.

The second book is titled LUM'S and it is about two brothers who own a grocery store in North Central Minnesota. The plot is a tad slow and is centered around their attempt at expansion of the business. With both books I am learning a lot about my uncle, but also using some of the skills I've learned in my writing workshop to see why maybe these books didn't catch any interest.

None of it is meant to detract from my admiration for his effort and all of the work that went into each. As a fledgling writer myself, I hardly feel qualified to judge anothers writing. At the same time, I've learned a few things along the way, things that I would love to have been able to tell Jack in a writing group or through personal correspondence.

For instance, in LUMS, the two brothers are named Elmer and Elroy. While I get that families sometimes do that, as a reader, I am forever getting the two mixed up. My writing coach would bust my kneecaps for doing that. Even if it was Elmer and Edward, it's better than two El-names in the same story. Again, it might only be me, but I would think I'm not alone.

Here are a few things that I've learned in the couple of years I've been in AllWriters' workshop.

1. Make something big happen. Nothing is worse than a series of facts, descriptions, and situations. People already live that out in day-to-day life. If there's not some "kapow" in your story why would they want to read it?

2. Watch your Point of View (POV). As a narrator you can't switch POV's without some sort of transitory break in the story.

3. Too much description is almost as bad as not enough. Don't assume your readers are blind, but don't leave them trying to guess the scene either.

6. Reading your story aloud before you read it to others will expose errors you'll never hear when reading it silently.

7. Have a beginning, middle and end. Basic stuff, but it holds true for chapters as well as novels.

8. A good title makes a good story/poem/novel that much better.

9. Most people who criticize your work mean well; some are just better at relaying the criticism (or do it constructively).

10. In the words of my writing instructor, "Don't out write the headlights." In other words, don't start a work with the end in mind. Just start writing and write as far as you can see at that moment. The end will come, but if you know it now, you'll miss what should have been. Good advice.

Again, reading his works have been enlightening to me in many ways. It has certainly helped me to understand my father's side of the family a little better, especially Jack. At the same time, I sincerely feel it has made me into a little better writer myself. And thinking it through, that may have been the true purpose for why it landed in my lap all along.