Shouting Down A Hole 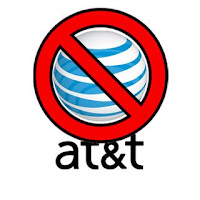 I was hoping I could leave the ATT post as a single ranting post and be done with it. Their corporate arrogance and ineptitude make that impossible however. Bear with me for one more post as I try and put this problem to rest forever.

I called back today to tell them I hadn't received the forms to declare my employment/discount eligibility via email like I was promised on Friday. Well, of course the first guy couldn't handle it because only customer service can do that. So, I was promptly transferred to someone cleverly disguised as a friendly customer service clerk. She was pleasantly patient and seemed to be eager to help. Well after repeating my name, address, and my wife's last 4 social security digits another time, she assured me that if I were to take down the 14 digit account number and give it to the representative at the first number I called, it would all be done.

Wanting to finish the procedure (and being 20 minutes into the process at this point) I called the guy right away. After taking my name, address, and my wife's last 4 social security numbers, he informed me that my eligibility proof of employment period expired on the 12th of October and that I'd have to reapply.

Are you feeling the rage?

Again, I am a patient person, right? I started to boil and politely told the gentleman that he was going to make me lose patience. It was the friendliest way I could think of to not curse his entire ancestral line. After listening to my plea and typing something into his computer, he told me that he was sorry, but all he could do was send me the forms for me to fill out so I could reapply. So I told him to do just that.

It's been 8 hours and I'm still waiting for the forms to show up in my email box...

Remind me next time to start every support call to ANYWHERE computer or phone related by asking the support technician's name before we start talking. This will allow me to begin to compile the documentation for the pending BBB complaint.

I'm a David in a Goliath world here.