All The Right Moves 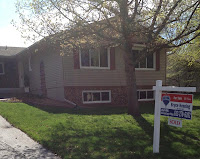 My sister in-law sold her house recently, and just this past week, moved into an apartment. I am very happy that she had a very quick sale, especially in this market. She was lucky to be able to get out from under the huge burden that it was becoming. As a working single parent, time spent between the house, the yard and the pool, and raising two daughters just got to be too much. Houses can sometimes be too much when you have two adults working on it. Take one of those out of the picture and I wouldn't blame anyone for downsizing.

That doesn't mean the sale of the house doesn't hurt a bit. I'm sure it hurts her and her family with all of the memories tied up in it, but its kind of sad for me too. Because we stayed there whenever we went to St. Paul for holidays, etc., there are a lot of memories for myself and my family that that house holds.

Selling a house is rarely an easy thing. I know when our house on Portland in St. Paul, the house I grew up in, went up for sale, my brother Rob said to our mom, "I do NOT like that sign out there!" Mom had just gone through a divorce and like my sister in-law, was overwhelmed by the house. Most of the kids were out anyway, so she was looking to downsize. What was she supposed to do? I still remember her reply to him which was "The house is just a building, the memories go with you wherever you go." Rob didn't like the answer, but he also knew she was right. 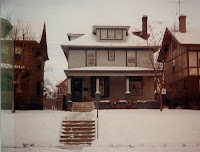 When you live somewhere for 15 years (which is how long we lived at Portland), you grow kind of attached to it. Double that number and, well, a move would be downright devastating, I imagine. The thing is, for various reasons, I've missed all of the subsequent places Mom has lived since Portland too. I think a little part of your spirit gets left at every place you inhabit.

I didn't like it when Donna's parents sold their house and moved into an aging-friendlier house across the road. I'd only been there for holidays and occasional vacations, but those times had given it meaning. I didn't want to "break in" a new house. What was wrong with the old house?

There will come a day when we need to move from this house. With the kids approaching college, that day is coming sooner than later. As much as my wife and I joke about selling it outright to Carroll University so they can do with it what they please (including knocking it down,) there's a huge part of me that will have a hard time letting it go. I suspect the kids will have an even harder time of it, as it's the only address they've known. I'll try the old line mom gave us about it being only a building, but my guess is they won't like it as much as Rob didn't like it.

Overall, I count 9 different addresses I've had since Portland. Nine in 28 years. A little less than one move every three years. And that is not even as bad as some people. We are a transient society. My friend Pat always used to say "Wherever you go, there you are." Circumstances dictate that moving is part of life, and guess I need to get over it.