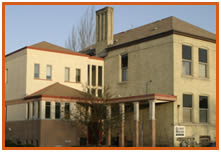 Indulge me for a moment. I know I've written recently about serving at the Guest House homeless shelter, but I need to write again. I would prefer to talk about the great fishing outing I had yesterday or the rainy summer we've been having, but I can't stop thinking about today's service at the Guest House. I'm sorry for the repetition, but I have to write what's on my heart.

Recall that my wife is attempting to organize and/or serve one meal a month at this transitional living facility in Milwaukee. She solicits donations, largely using social media, from a Facebook group of donors and others who wish to contribute. This is a fairly daunting task from month to month, depending on what she has chosen to serve. Despite fears and concerns every month that certain foods will not be filled by donors using the online donor site she has set up, somehow we always manage to get everything we need to pull it off. Call it God's provision, people stepping up to the plate, or just dumb luck. Whatever it is, it's pretty amazing.

So this morning was our turn again. We met up with another family at a park and ride and rode down together.

When we arrived, our van was again swarmed by men offering help to carry in the food. After I was in and kind of standing around wondering where to start, a man came up to me and another volunteer and said "I need someone to pray with me." At first I wasn't sure what to think, partly because I'm friggin' deaf and partly because I wasn't sure whether he was serious or not. When he repeated himself I asked him if he wanted me to pray over the food or for him. He said, "Both."

Now, I'm not a pastor, I'm not a deacon, and, as you well know, I'm a self-proclaimed introvert. At the same time, when opportunities like this are put upon me, I take them seriously. I asked the gentleman's name and the three of us bowed our heads and I said what came to me. I'm not sure exactly what I said in the prayer but I do know I covered a lot of ground in 90 seconds. I also know I thanked God for what he was doing in this guy's life and the impact he was having on the other guys, maybe without even being aware of it.

When we were finished the guy thanked me and said I had no idea of what my words meant to him. I would argue that he had no idea of how our little interaction was impacting me. While our goal might be to feed 80+ guys a meal in order to send them into their day of healing, job searching, networking or whatever, this was what I would consider part of the total benefit and compensation package of being a volunteer at this place on this day. Going to bless, coming away blessed myself.

Later as I stood pouring juice, one guy kept catching my eye from across the room for some reason. He ended up coming over to me and introducing himself. Just started out saying "How you doin' t'day?" We ended up talking for a good ten minutes. I heard about his struggles, his family and his wrestling with his faith. I think it was therapeutic for him. Maybe he'd seen me praying with the other guy, maybe not. For some reason though, he sought me out. I finished our conversation by telling him I'd be praying for him and I've been thinking of him and doing that ever since. Again, the benefit and compensation package that I'd never expected when I signed up for this.

I want to reiterate that I don't tell these stories in an attempt to edify myself. I don't volunteer to satisfy my guilt. I do it because I love people. Lately, and it's a post 50 thing, ask my wife, I love hearing people's story.   I think by listening you learn so much more than you do by talking. It means something to people and it meant something to these guys. If I get nothing else of substance done today, I've got that much to take to bed with me.

And for a Saturday that beats the heck out of sleeping in.