Well, it's homecoming week for my kids' high school as well as for Carroll University, (the college right across the street from me.) What a great tradition! It's the celebration of people returning to their alma mater (High School or College) and is built around a dance and a football game. It's a great way to build school spirit while giving the kids a chance to be kids a bit.

At Waukesha South, every day this week is a different dress theme. Monday was "Seniors" day where kids dressed up like old folks. Tuesday was "Mismatch day" where you were to dress with plaid and stripes or things that clashed. Tuesday was also "Toga Day" where the seniors got to dress in Togas and were allowed to "storm the halls" in the afternoon. Stupid, crazy fun, but a good way for students to build great memories and have a good time in school. Wednesday was 50's day where you had to dress like it was the 50's. Thursday is "spirit day" where you dress in school colors.

It brings back memories of my own homecoming experiences of my years at Cretin High School. Being an all male, military high school, as freshman we were required to March around the track before the football game started at St. Thomas College (now St. Thomas University, I see). It was considered our "home" field, much like Catholic Memorial High School uses Carroll University's field as its home field. 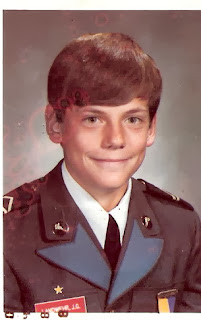 And so, march me and my classmates did. I'll be honest and say that it kinda sucked wearing your uniform at a game, but that would probably dishonor what the uniform was supposed to stand for at the time. Still, as a 15 year old, it kinda sucked.

As a bit of an aside, attending high school football games was one of the fonder memories of my high school years. There's something so fun about piling some of your friends into one of their dad's cars and going out on a Friday Night. It was one of the first times I really felt like an adult. A mini-adult perhaps, but adult nonetheless. We could raise hell at the game, go out for pizza afterwards, and stay out late-ish.

The rest of Homecoming week was all good too. One of the bigger things was getting a homecoming button for $1.00. The funds raised went to the Student Council, I think, or maybe some charity. I actually still have all of my buttons from Homecoming and MidWinter - the winter equivalent of homecoming.

There was something for every class too. Freshman had "Frosh Field Day" where they spent the afternoon out on the practice field doing torturous drills (aka games) overseen by the seniors. I think we were broken up by homerooms or something. It was fun even though it was really just sadistic seniors beatin' on the Freshman.

Sophomores had some event that escapes me.

Juniors had the Big Ball Bash that meant playing soccer with an inflated ball probably 10 feet in diameter. The year I played it it lasted 10 minutes and somehow got popped. Game over.

Seniors had Hobo Day where they all dressed in costume and spent the afternoon disrupting all the other grade levels by going around the school and singing the Cretin Rouser (school song). There's nothing like blowing off classes to goof around and be disruptive.

Homecoming is a nice reminder that while school is meant for hard work, learning, making friends and growing up, it can be a lot of fun too. With that, I'll leave you with the Cretin Rouser.

Oh dear Cretin High, the greatest school in all the land.
Our Alma Mater we doff our hats to thee and stand.
The purple and gold spells loyalty we’re proud to show.
Hail Cretin, Rah! Rah! Hoo-Rah! Hail Cretin High let’s go!
Fair school of our youth, our happiest days were spent with thee.
The friendships we’ve made, will live fore’er in memory.
Wherever we go our motto always VICTORY.