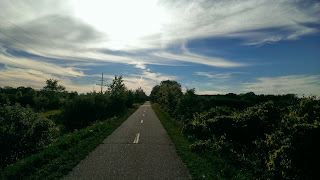 I am a bit of a biking nut. I usually put on between 1200-1500 miles in a typical season, running from late April to late October. I bike to work almost every day, even though it's less than a two mile trip one way. Then, most nights I bike another 8-10 miles on the Glacial Drumlin trail near our house. It has become my nightly ritual, a way to decompress and work through the events of my day.

Evidently I am not the only regular out on the trail from night to night. I often times see the same people walking, biking, roller blading, or land-skiing. It's funny what I think about when I'm riding and seeing these people from day to day. Some of them communicate or acknowledge, while others just whiz by, intent on finishing their workout. I love to people watch anywhere I go, so this presents its own form of that. It is an interesting cast of characters, including:

So it's an interesting cross section of loners, weirdos, workout fanatics and OCD personalities, but I've grown to love seeing them every day. They're my peeps.