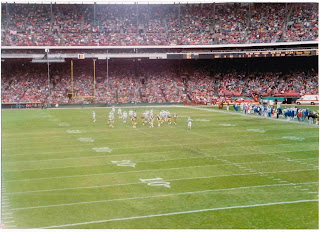 It's playoff sunday. The Packers play the Forty Niners in the Wild Card game at 3:40. I will be watching. I love this time of year. I am a professional football fan, have been since I was a kid. I grew up watching the Vikings play on TV or listening to them on the radio when it was blacked out. This carried through to my adult years, only my allegiances have shifted to the local team, Green Bay. I still pull for Minnesota, but not when they're playing the Packers.

Following football has always been a conflicting thing for me. I love the game, I love the competition, I love the hard hitting action and I love the drama that some games create. At the same time, I always struggle with the time-suck that it can be, especially on a nice fall afternoon. That's part of what I struggle with, but the other part is the disappointment factor. Let me explain.

In my forty years of watching football, I have exactly two Super Bowl victories to my credit. The teams I have followed, counting Minnesota, Buffalo and Green Bay, have appeared in eleven of them. So we have the statistic 2 for 11 (in Super Bowls). Or, if you want to get picky, 2 for 40 (in years). The odds are not really in one's favor as a fan in the National Football League, regardless of where you live. Even the Dynasty teams only have a handfull of super bowls in their many years in the league.

On the other hand, when they win on Sunday it makes the week a little lighter. When they win in the playoffs, it's creates a mini-holiday, festive spirit at work and in our cities. When they win a Super Bowl, well, that's bragging rights.

I know everyone is not a fan. Some people hate football, others just have no interest. I have no problem with these people. When it comes down to it these athletes are coddled millionaires playing a boys game. I get that and it angers me when one of them complains about his contract of is disloyal to his team. It's a cancer in all of sports.

So why do I watch?

I watch because meltdowns like the Kansas City Chiefs had yesterday versus Indianapolis is like a soap opera to me. It's the second biggest playoff meltdown in history. I couldn't look away.

I watch to see Adrian Peterson run like a madman over, through and around people, including my beloved Packers. There is nothing better to me than watching a good running game. My first exposure to how dominating a running game could be was when Larry Csonka ran OVER my Vikings in the super bowl.

I watch to see comebacks like Aaron Rodgers pulled off over the Bears last week to propel the Packers into the playoffs. Before him the master at this was Brett Favre. Elway, Montana, and many others were perfectionists at it too.

I watch to see the Purple People Eaters, the Steel Curtain, the No Name Defense, the Cardiac Pack, the New Orleans 'Aints, the Orange Crush.

I watch to see if the Lions are ever "for real" (they never are), if the Browns, a team I've always pulled for, can finally get to the playoffs and win, (they never do), to watch my two least favorite teams lose (Steelers and Cowboys) and to see if the Chiefs, Chargers and Bengals will ever get back to the Super Bowl (not this year, is my guess.)

So my question today is, can Green Bay finally knock off their recent nemesis, the San Francisco Forty Niners? Can they win with their substandard defense, all of the injuries they're fighting and despite sub-zero temperatures that are forecast? 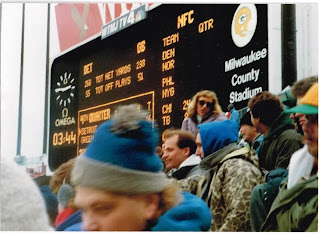 I don't know, but I sure intend to find out.