January 14, 2014
I spent last weekend in Hudson, Wisconsin with my family. We went to watch my niece and her fiance' get married. They have been engaged for over two years and have been planning the wedding ever since the engagement. It was a beautiful wedding, carefully attended to by many family members working in advance and "in the wings" during. My niece, bless her heart, threw her all into the preparations. By the time she got to the wedding she had every detail mapped out, and it paid off. She was able to relax the day of the wedding and enjoy the attention she and her husband deserved.

It was really cool to be part of their day. My role up front was to put together a photo montage of the two of them. Then on the day before, I helped with the decorating and some other minor details. The whole family worked hard to make sure it was a special day for the couple, and it was. 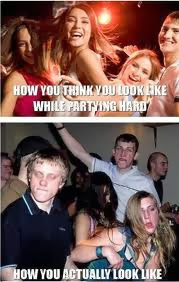 By the time the reception rolled around, everyone was ready to let down their hair. After dinner and the video, the DJ started the music and the dancing started. With the exception of the "special dances," the dance floor was packed most of the night. I think a good analogy is that the human body is like a rug, and sometimes it just needs to be shaken out really, really good. That's what happened on the dance floor.

Now, I've mentioned this before, that dancing is not always an elegant, glamorous, or sexy thing. In fact, for roughly 80% of the population, it's not. While people think they are "in the groove," often times they're not even on the record. They're behind a beat, their moves are 20 years out of date, or they're DWW (Dancing While White).

I know this for a fact, because I am them.

For starters if God had meant dancing to be glamorous or sexy, he'd put a height limitation on the dancers. Certainly no one over 6'2" would make the cut. I'm sorry, too many gangly limbs flying too many directions. Someone's going to get hurt. Furthermore the tall guy, whether he realizes it or not, becomes impossible not to see. He is the dance floor lighthouse. People sitting down use him as a reference while watching everyone else dance. If they see someone cutting it up with zeal, often times they'll say things like, "Look at that couple to the left of the tall guy."

Tall people are a moving, shaking, and, in my case, apparently epileptic, point of focus.

But God didn't intend for dancing to always be sexy or glamorous. In my opinion, we are to dance with whatever reckless abandon we feel led. If it's a guy doing the pogo next to you, let him bounce. If it's your niece doing the sprinkler, let her sprinkle. If you find yourself dancing hip hop style and you're a middle aged Caucasian in the 98th percentile for height, well, hop on, bro.

I think there's something freeing about giving it all up and leaving it on the dance floor. It probably has curative qualities about it. It's complete release. It's probably endorphin inducing as well. If I hear a good song, it takes everything in me not to dance. If I do, I always feel better when I'm done. So you can laugh all you want, because I sure enough don't care. From the looks of it, neither does anyone else on the floor.

So get up everybody and dance.