All Kinds of Dirty Things

August 03, 2014
I thought I'd give another writing/Dirty Shirt update because the life of a newly published author is about as fun as it gets, at least so far. I'll touch on some of what has transpired in my endless pursuit of making it to the New York Times Bestseller's list. (Enough from the peanut gallery, there!)

Some of the cooler things I've found came when I googled my name and Dirty Shirt as a few keywords. Everyone should try this at some point to see what's out there about you, whether you know it or not. It was in doing this that I found my book was being offered through Omni Lit.

Now, I have no idea how they got a hold of it, but near as I can tell, they harvest the data from Amazon and then sell the book. Hopefully I get a cut from it somewhere along the lines, but who knows? I trust they're in cahoots with Amazon and the authors do get some stipend, like a couple dimes.

I also came across a mention of the book in the Duluth News Tribune. They gave it a short blurb, in their electronic version anyway, and I'm hoping it hit the paper form too. I may never know. I am very grateful to the editors at that newspaper for the mention. I love that city and it has the perfect audience for the book.

One of the distributors for the book was supposed to be iTunes. A while back I talked to the publisher about it not being there yet and they reassured me that it sometimes can take up to six weeks from the release date. Well on August first it finally hit iTunes. I'm not sure how many sales will come from iTunes, but I'm guessing anyone that was waiting for it to come out for an iPad or iPad mini, would now take advantage of that. As I see it any outlet that sells it is a good outlet. 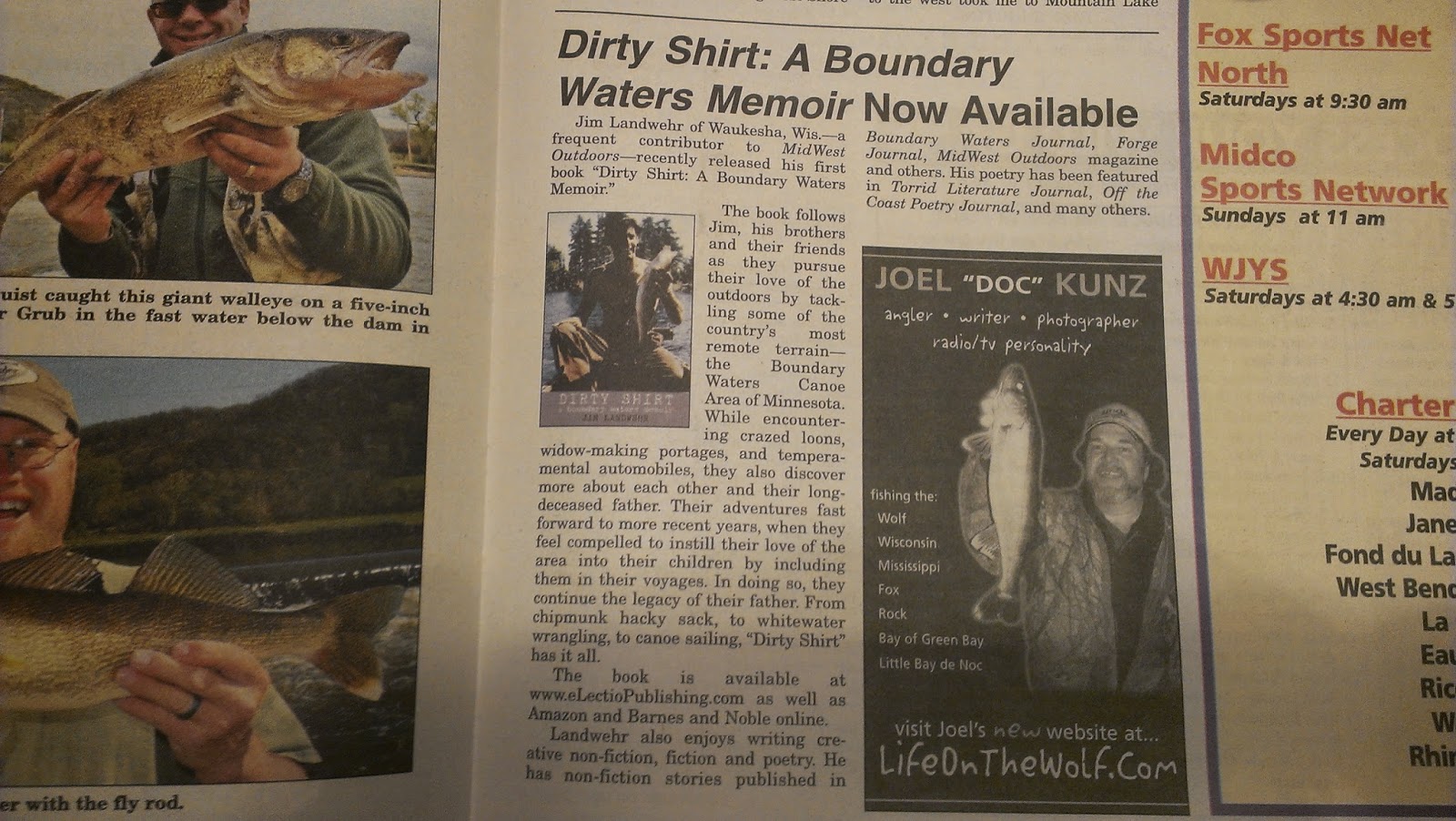 I also got a really decent mention in MidWest Outdoors magazine, mostly because I've written a number of articles for them in the past. They are good people and didn't charge me a cent. They will continue to have me as a loyal customer of their great mag. They have treated me well over the years.

I did get shutdown by the Madison bookstore I was trying to get into. They weren't interested in a reading because my book came from a small press and I was on the "edge of the local author region." The bookstore market in general has been a complete letdown. It is my impression that they are struggling to compete with the likes of Amazon and other distributors, so they can be more choosy. I will continue to be persistent in the hopes of getting one in the Twin Cities however.

I had a decent week of ad-hoc sales from home too. I think I sold about six books to friends or friends of friends. Word of mouth is starting to catch on, and that is sometimes the best way to sell. I've also told people I will personalize copies and mail them from here if they are okay with paying the four dollars to cover shipping. That offer still stands. Tell your friends.

In my quest to get lodging for the upcoming Piragis Bookstore signing on August 23rd, I was running into all kinds of dead ends. Either no hotel space or rooms on the order of $150+/night.  Luckily at the last minute I was able to reserve a campsite at the Fenske Lake Campground 20 miles north of Ely. I thought it was a perfect fit for a book tour pitching a book about camping. At the same time, my illusions of grandeur of limo rides to meet Oprah and jet rides (or at least float plane rides) to interviews where I'd be wined and dined have been dashed. My limo is a 2004 Hyundai and my bodyguard is my son, Ben.

And you know what? I think I like it better this way. It will be some good road time and a great chance to bond with him on the edge of the BWCA, even if only for night. 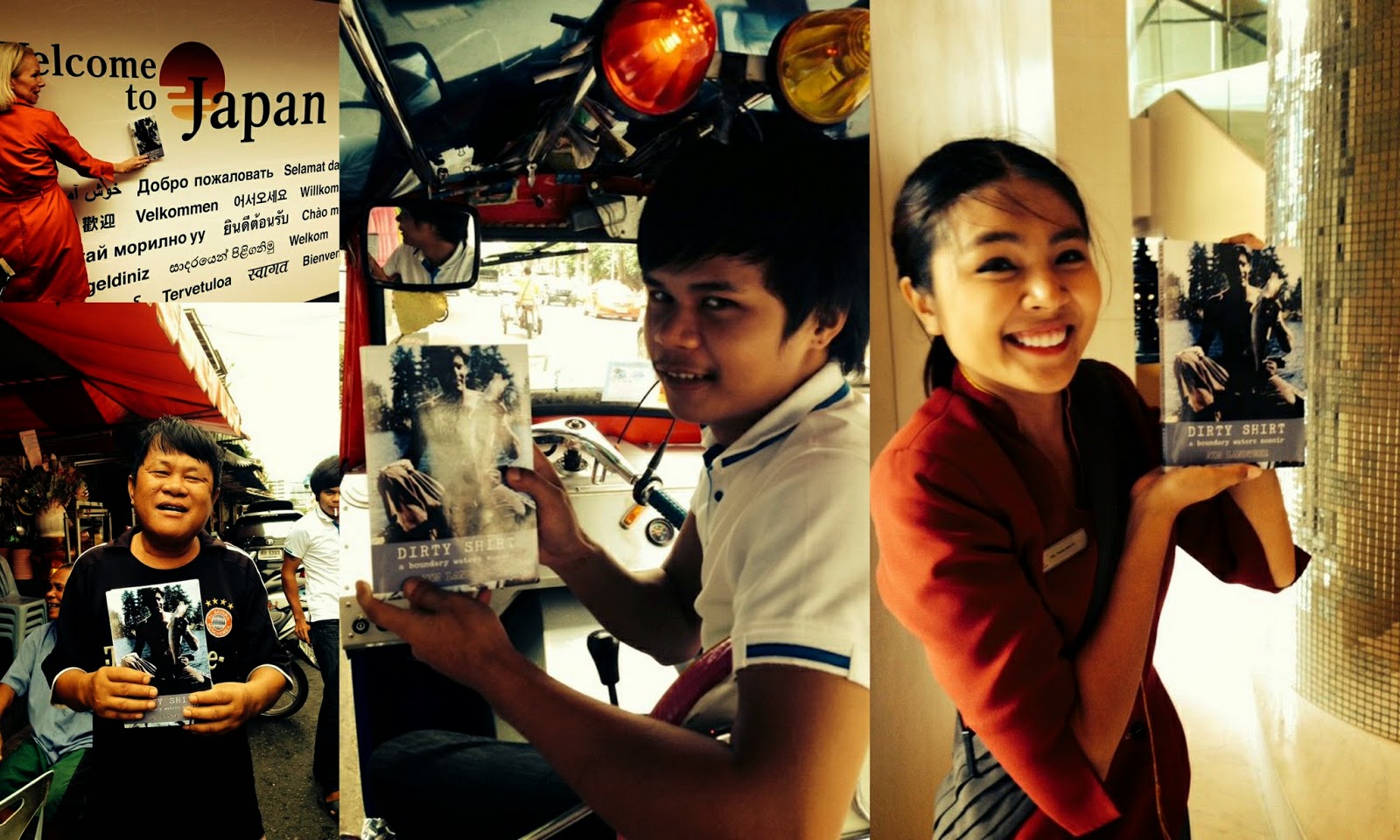 And finally, in my quest to continue to have fun with the book's release my step sister who is a flight attendant for Delta Airlines international bought a book from me with the promise that she would take it around the world with her, kind of promoting it along the way. Her first stop last week was Japan and Bangkok, Thailand. True to her word, she got pictures along the way. She is turning my book into the "Flat Stanley" of  the literary world. She's such a sweetheart. I love her for making my book release even more fun than it already was. Here's so shots from Tokyo and Bangkok.