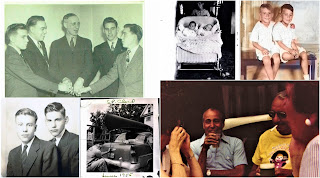 As many of you know, I lost my dad early in life. He was killed when I was only 5, so I never really knew him, but as I said, most of you know that.

What many people don't know is that he was a twin. He and his brother Tom were fraternal twins. born in 1925. My uncle Tom was a little shorter and of slighter build, but they both shared the "Landwehr look," as I call it. 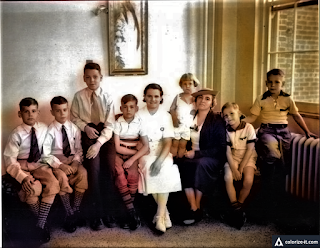 My dad and Tom were two of eight children born to Adolph and Magdalene Landwehr in St. Cloud, Minnesota. Their were 7 brothers and 1 sister, the eldest, Aunt Mariette. I remember many, many long car trips up to St. Cloud to visit family and in later years to attend funerals. A "long" car ride back then was a little over an hour. It seemed like seven. I can also remember getting car sick in the back seat and vomiting into a cereal box but, hey, sorry about bringing that up.

Well, uncle Tom passed away this week, the last of the 8 children. The end of a generation, so to speak.


Over the years my aunt and uncles have passed away. Some relatively young from cancer, and some old hold outs like uncle Tom. He was an independent spirit, carrying canoes on his back to go fishing into his seventies, from what I've heard. He was an accomplished taxidermist as well. One vivid memory I have is spending a weekend at his house and being freaked out by all the stuffed ducks and critters that lurked when the lights were shut off at bedtime. Weird how you remember that stuff.

Uncle Tom was also a navigator in the Air Force in WWII. When I was up in St. Cloud a few years ago for a book signing, he was telling us stories about how he'd ditched his plane because they'd run out of fuel. He was in a B-17 "Flying Fortress" and had a number of active missions to help defeat Nazi Germany. When I hear these stories, it makes me even more cognizant of how we need to honor our veterans. 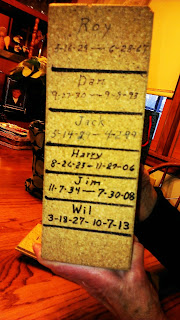 Every year my uncles used to gather for the "Landwehr Hunt." It was usually a gunless affair that involved adult beverages, cards and late nights. Going way, way back, they had purchased a bottle of expensive booze that remained unopened. There was an agreement that the last brother standing at the hunt after the rest had passed, would open the bottle and serve it to the older sons of the uncles who still carry on the hunt tradition today. I got to see the bottle when I was up at the book signing I talked about. It was cool to see the brothers' signatures with dates next to their death dates.


I think a toast to Uncle Tom would be in order this week. He will be buried tomorrow in a military cemetery.

I suspect he's up in heaven trading fishing stories with my dad and my brother Rob right now. There's probably a little exaggeration going along with it, because that's what fishermen do.

Tight lines you three, and be sure and save me some minnows.

Rebecca A. Maynard said…
It was only later that she came to realize that it was tinnitus, a ringing in the ears that Craig had suffered from for at least two decades, that drove him to take his own life. Tinnitus In Children