Coffee And A Dragon

March 25, 2018
This afternoon I had coffee with a Vietnam Veteran. Bob Goswitz served a year overseas in the 196th infantry division in 1971. I consider it an honor to sit with someone of my generation who served in a war that marked my first exposure to military conflict. I was only 10 years old when he served, but I remember watching the news at night and seeing snippets of guys in combat. People have said that the Vietnam War was the first war that kind of came into peoples' living rooms. Well, Bob lived it and was fortunate to be among those who made it back home.

I have an elevated respect for the men and women who served that war. It was a war that should have never happened, certainly not to the level it went. The soldier who returned were never treated as the heroes they were, a travesty in my opinion. It was a contentious time in our country with civil and racial unrest at levels never seen before and the debate about the war was a large part of it. 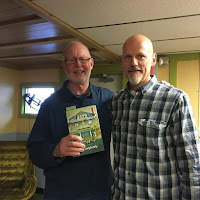 Anyway, Bob has written a book titled The Dragon Soldier's Good Fortune, due to be released July 21st, 2018. The book is fictional but is based on his experience as a soldier during that time. During our talk he mentioned that originally he was pitching the book as a memoir. Then, his agent asked him what made his memoir unique from the hundreds of other Vietnam memoirs. This caught him off-guard and he began to rethink the framework for his book.

To make his book more unique and appealing, he researched Vietnamese folklore and mythology and found that much of it is based on dragons. He worked a dragon into the story and added a degree of magical-realism to the book. I will be reading an Advanced Review Copy (ARC) of the book to try and give him a review, and I can't wait to dig into it.

He was looking to pick my brain a little on the intricacies of book promotion and I was happy to help. I still say I'm making it up as I go, but have a few years experience so am glad to mentor where I can.

Bob taught special education for thirty-plus years after his duty and has been retired for 11 years. He mentioned how good it was to be able to talk to another guy about writing and publishing. There seems to be a 4:1 ratio of women to men in our writing circles, so to come across someone about your age and fairly new to the writing craft is sort of refreshing.

I look at these meetings - cool people whom I admire and appreciate - as one of the intangibles of the writing life. Bob came to one of my Dirty Shirt reading/signings and has been a fan ever since. Without my books there would be no friendship.

And because of my books, my readers and my writing network, life is that much richer.