April 29, 2018
A couple nights ago I attended another book launch. I've been doing my share of this these past few years, as it seems many of my writing friends have reached the point of completion for their novels, memoirs and poetry books. I can confess that writing a good book takes years, especially if you're trying to hold down a full time job to boot. The whole "write a novel in a month" thing, well, it doesn't quite happen that way, I'm afraid. 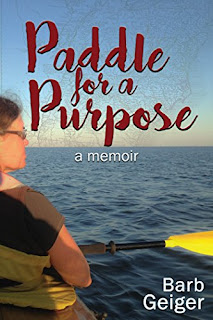 Anyways, Friday night was the launch of an adventure memoir titled, Paddle For A Purpose, by Barbara Geiger.  It was an especially cool event for a number of reasons. When Dirty Shirt was released, I did a reading from it at a local event here called Friday Night Free For All. After my reading, Barb approached me and mentioned how she'd enjoyed the book, but also mentioned that she was working on her own outdoor paddling memoir. She went on to say it was about a trip down the Mississippi River with her husband in a homemade kayak she'd built.

I was instantly hooked on the story.

It turns out that she'd built the canoe with her dad and her son, making it an cross-generational project. Then, when it was done, her husband said, "So how about we take it down the Mississippi River?"

She laughed and said, "The whole river?"

As you can imagine she was just a bit trepidatious.

I won't tell the whole story, but suffice it to say, it started with a frozen tent at the headwaters of the Mississippi in Itasca State Park, then moves to flipping over in the rapids and gets more adventurous from there.

The trip was planned around doing service projects at stopping points all along the way. Barb and her husband are people of faith and they believe in giving of themselves, their time and their resources. They worked with Habitat for Humanity and several other agencies throughout the trip.

To me, this makes for a much better story than just your average kayak adventure. As she described during her book launch, they met a number of "River Angels" along the way. People they feel God put in their way to help them along. People who gave them a meal and a bed or simply a word or prayer of encouragement. Each of these became a character in the book - albeit unintentionally at times.

Another reason it was so cool was the fact that I got to see what was basically an "idea for a book" actually come to fruition. I talked to Barb many times along the way and was curious how it was coming along. When she mentioned she was in the final editing stage, I was elated for her. 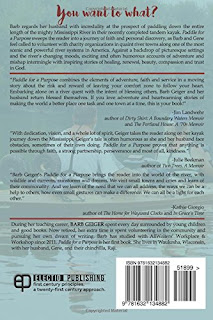 Once it was finally done, she was looking for a publisher. I mentioned Electio Publishing, my publisher, who might be interested seeing as how they gave me a shot with all of my books. I mentioned they were a Christian-based house which would make for an even better fit than mine. Well, they ended up accepting her book and the rest is history. She even asked me for a blurb, which made it to the back cover of the book. It is always an honor to be asked!

More coolness in that she put together an interactive map plotting their route with photos and links. As a map guy, I can really relate to this. While I did a Story Map for The Portland House book, Barb did her own, based on Google Maps. It works great and you can check it out Here.

Perhaps the coolest part of the whole book is that she plans to donate ALL of the proceeds from her book sales to charity. It sort of brings the whole journey full circle - service, selflessness and giving all along the way.

So if you're looking for a good outdoor adventure memoir with a noble cause to it, I'd say give it a look. It's for a good cause!