August 05, 2018
I am just back from a weekend in the Twin Cities where my wife and I helped move my daughter into her new apartment. As always there was just a whole lot, I would even go so far as to call it a crap-ton, of driving involved. For starters we took the "scenic route via LaCrosse. Every few years or so, we do this to shake the trip up a bit. It adds an hour to the total trip, but the scenic bluffs and vistas help make it enjoyable.

But it wasn't the driving that stood out to me this trip.

It has been over thirty years since I moved to Wisconsin from St. Paul. Now, when I drive around the Twin Cities I cannot help but be amazed by the diversity of the population. It is wildly different than when I was a kid. My daughter lives in a cool part of Minneapolis about a mile from the Viking's stadium, and it is a community immersed in diverse.

The Twin Cities have always been a haven for refugees and immigrants, first with the Hmong population when I lived there and lately with a large Somali influx. And looking from the outside in, it is kind of amazing what thirty years can do. All of it good - at least from a returning former resident's perspective. It sure looks a whole lot more melting-pot-like and cosmopolitan than when I was growing up and I think that's a good thing. It is great to see people of every color and language almost anywhere you go. 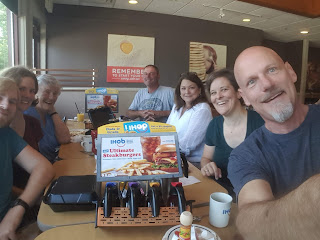 The other thing that struck me happened during a trip to Ikea yesterday to get my daughter some furniture. When we got there, the store was packed. People were lined up waiting for flat carts to buy furniture. The place is huge and I couldn't get over how many people were spending hundreds of dollars on furniture and furnishings.

Even more however, I thought this is probably an EVERY WEEK thing. How can so many people need so much furniture, EVERY WEEK? I might be crazy, but it just struck me as weird. I'm sure if I owned stock in Ikea, I would feel differently, but as a person who hates malls, I just thought it was amazing.

After a great weekend with my daughter, her boyfriend and much of my family, I have to say I do miss the cities. It will always be home for me. At the same time, as I headed east on the drive home, I reflected on the fact that I have a whole life back here that much of my family back home doesn't know about. And I don't know where we'll be in 10 years, but wherever it it, it will be home too.